Report by Pabitra Nayak; Balipatna: It seems, sand mafias are ruling
the Balipatna and Balianta blocks of Khurda district. With rampant
illegal sand lifting going on, locals feared for a massive disaster
during flood and rainy seasons. Massive illegal sand lifting has
created erosion near river bridges in several areas.
Locals said tenders were invited for sand lifting way back in 2015 but
it was only materialised in 2018 with one Kamal Kumar Patra got the
bid for 8 sand ghatas in 2 blocks.

Local people said some influential people are allegedly lifting sand
from the river bed using shallow machine-run dredgers and selling it
to local contractors. They said the river erosion has taken a serious
turn in recent weeks due to rampant sand lifting by using dredger.
The under-construction project on the bank of Balianta – Kushabhadra ,
Tankapai and Uttara areas of Khurda district has been threatened by
illegal sand lifting.Local villagers are in fear of losing houses and
crop lands as the erosion of river has increased in recent weeks.

Mines and Minerals Act of 1961 and also the new Mines and Minerals Act
of 2015 does permit for JCB like big machines for sand lifting and
violating all norms and conditions, the lease holder Kamal Patra
drilling 30 ft to 40 to lift sand from river bridges of Balianta –
Kushabhadra , Tankapai and Uttara areas of Khurda district.
Sources also feared that Jhinti area will be flooded if sand lifting
not stopped as soon as possible. Sources also revealed that sand lease
holder Kamal Patra has considerable influence in Jayadev Assembly
segment and he played a key role in selecting Block Chairman of
Balianta and Balipatna Blocks of Khurda district. 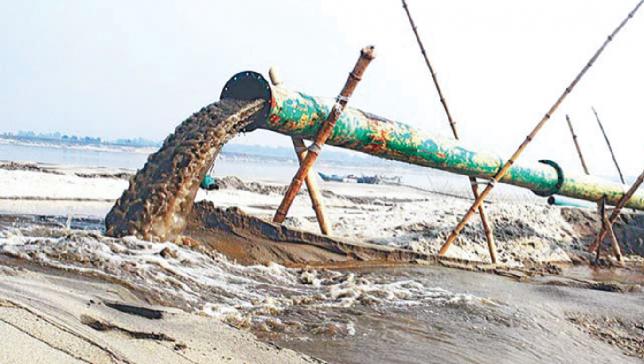 Videos are showing heavy JCB machines engaged for sand exploration
work has gone viral. Sand being lifted by sand mafia by using heavy
machinery which is not permissible by the Government of India and
Odisha as it goes against “Mines and Minerals Act,1961. “We demand
that District administration should take prompt action and stop sand
lifting at river bridges of Balianta – kushabhadra , Tankapai and
Uttara because it will caused damages at the time high flood due to
erosion of sand from rivers,” a local in Balianta said.

However, official sources said bids have been awarded as per rules and
action will be take if anything found illegal during sand lifting.
Despite several attempts, on the other hand, contacts was not possible
with lease holder Kamal Kumar Patra.
Local villagers admitted and said.”Rampant illegal sand lifting is
going on and no action against sand mafias have been taken so far,”
they lamented. As Balipatna and Balianta blocks are flood prone area,
locals are apprehending major damages during flood seasons, they
added.