New Delhi: To celebrate and commemorate the 75 years of Independence and as India enters into the Amrit Kaal, Ministry of Coal organized special events and programmes throughout the country from 7th to 11th March, 2022, as part of the “Azadi Ka Amrit Mahotsav” Iconic Week celebrations.

As part of the celebrations, a series of commemorative events and activities were undertaken by the Ministry that showcase the best of India’s achievements in the coal sector and also lay down the roadmap for the future.

(ii) A talk on “Future of coal based electricity generation in India” was given by Shri. Rakesh Kacker, Former Secretary, Government of India in the presence of Secretary(Coal) and other senior officers of the Ministry of Coal and CPSUs through virtual mode.

(iii) A Blood Donation Camp was organised by the Ministry and large number of employees have donated blood.

(iv)  A Quiz contest on the theme-Freedom Struggle was organized in the Ministry. Officials of the Ministry participated in large numbers in the event.

(i)  A talk on “Environment and Social Sustainability in Coal Mining” was given by Dr. Ashok Jain, Adviser (GHD), NHAI, M/o Road Transport and Highways.

(ii) A Slogan writing contest on the [email protected] was organized in the Ministry. Officials of the Ministry participated in large numbers in the event.

(i) A short film on “Indian Freedom Struggle” was organised for officials of Ministry of Coal.

(ii)  Painting Competition for school children of the Ministry Officials/employees on the theme-“Freedom Struggle or India’s future @75 years was organized in the Ministry inviting a very enthusiastic response from the little ones.

(iii)  A talk on “Net Zero Emissions’” was given by Dr. J R Bhatt, Adviser, Ministry of Environment, Forest and Climate Change. (i)  A presentation on “Evolution of Rural Electrification Process in India: A Historical Perspective” was given by Prof Atul Kumar, JNU.

(ii)  A Poem recitation contest on the theme [email protected] was organized in the Ministry. Officials of the Ministry participated in large numbers in the event.

(iii)  A second camp of Blood Donation was organised by the Ministry and large number of employees have donated blood. (i) A talk on “India’s Energy Transition under a Net-Zero Future” was given by Dr.Vaibhav Chaturvedi, Fellow,CEEW.

(ii) A declamation contest/debate on the theme [email protected] Topic “Coal and Climate Change Indian perspective” was organized in the Ministry.

(iii)  Dr. Anil Kumar Jain, Secretary, Ministry of Coal addressed the valedictory session and distributed prizes to winners of different competitions held during the week and emphasized the need for celebrating these historical milestones so that the struggle for our Freedom is appreciated by  the younger generation for its worth and they are motivated to work harder for the nation building. 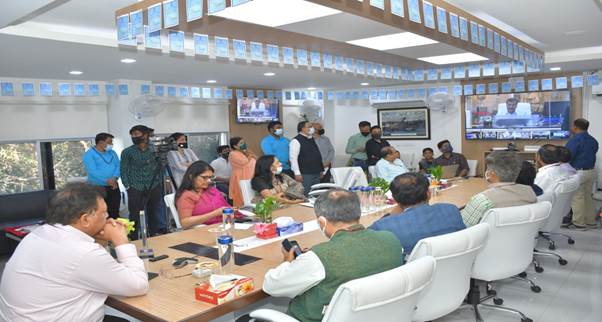 Government of India is celebrating 75 years of India’s Independence “Azadi Ka Amrit Mahotsav” to mark 75 years of progressive India and its elegant history. The official journey of AKAM commenced on 12th March, 2021 which kick-started a 75-week countdown to our 75th anniversary of independence and will end on 15th August 2023.

India’s merchandise exports rise by 16.8 per cent to USD 37.9 billion in last month