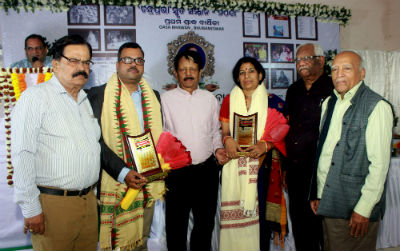 Bhubaneswar: Chandraprava Patnaik’s love for the suffering people and literature and her determination for upliftment of the deprived masses was highly praised by Rtd, Justice A.S. Naidu , famous linguist Padmashree Debiprasanna Patnaik and eminent poet Dr. Saoubhagya Kumar Mishra, who appealed the younger generations to follow her foot steps to create an atmosphere of love for the people and the society.

Chandraprava , though basically a teacher of literature, she was more known for her devotion for service of the suffering people . Daughter of eminent freedom fighter and social reformist Saraswoti Devi of Puri, Chandraprava fought against corruption and injustice from her student days. During the Seema andolan she participated in satyagraha and was jailed along with few other student activist, and was released on intervention of Acharya Harihar.

While recalling Chnadraprava’s activities Justice Naidu , who knew her from young days, said, her passion was to help people in distress and to fight against injustice and corruption. She got support and encouragement from her father-in-law , freedom fighter Raghunath Patnaik and journalist husband Prasanta Patnaik after marriage, to carry on her social and literary activities.

Her literary creations spread over from poems, stories, features and literary criticism. As she was a humanist all her writings were with humanitarian touch with reformist attitude. Justice Naidu expressed his happiness over Associated Media Foundations initiative in instituting the “Seva” award in her name befitting her activities till she breathed her last.

The award was presented to Dr Jayant Dash, an internationally known skin and rehabilitation surgeon, with whose “Midas” touch many lives have been saved and the victims were inspired to live normal life.

In his speech Dr Patnaik also paid tribute to Chndraprava for her contribution to Odia literature and journalism.

Speaking on the occasion famous poet Dr Soubagya Kumar Mishra described about the humanitarian aspect of Chndraprava’s writings which were largely reflected in her social life.

Ayuh Patnaik proposed vote of thanks to the dignitaries and awardees as well as to all those who attended the function at the OAS Association, Bhubaneswar. Prasanta Patnaik Chairman of Associated Media Foundation (AMF) presided.

The awardees were presented with statue of sleeping Buddha, citation, and anga bastra. On behalf of AMF, Mr Patnaik announced before media that “Chnd raprava Seva and Sahitya Samman” will be awarded every year to persons involved in serving the deprived and Odia literature.