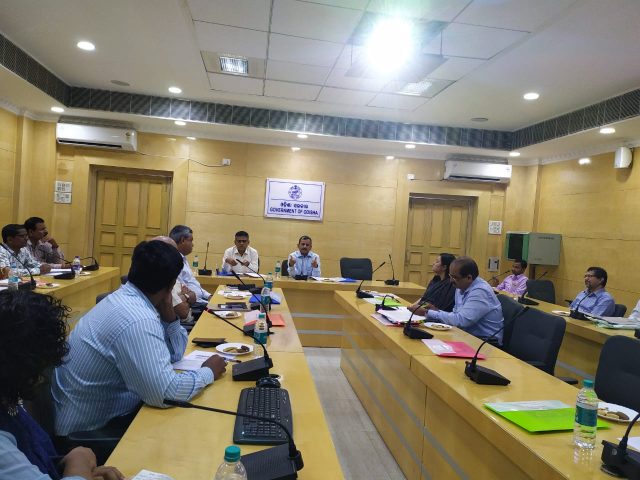 The committee discussed on various aspects on Millets Mission and how to strengthen the scheme across the state. Following the PDS distribution of Ragi in 7
districts procured during 2018-19 a survey to be conducted to get the feedback from the people. Integration with Different government programs to increase millet
consumption, Market linkage with bigger agency for sustainability of Millet Cultivation was some of the points raised in the meeting.

Shri Suresh Mahapatra, DC cum ACS emphasized on creating market linkage for millets through ORMAS and has an online marketing platform. He also asked to enhance
the consumption habit of the stakeholders for ragi. Shri Pradipta Mohapatra, APC suggested to have common procurement center for Paddy and Millets, if not possible then to create sub procurement center nearby. This year the state govt has proposed to procure 1 lakh quintal ragi from Kharif produce. The ragi Ladoos will also be a part of children in anganwadis. The committee also proposed to add millets in the mid-day meal in districts covered under DMF.

The National Conference on Nutri Cereal will be held on world food day 16.10.2019 at Krushibhawan, Bhubaneswar Special Programme for Promotion of Millets in Tribal Areas of Odisha (Odisha Millets Mission) was launched by Govt of Odisha in 2017-18 in 30 blocks of 7 districts. It was extended to 72 blocks in 2018-19 covering 14 districts. Programme in 65 blocks of 13 districts is funded under State Plan. 7 blocks of Keonjhar district are funded through District Mineral Fund. Govt. of India advised all states to adopt OMM model. GoI set up a task force (Under JS Crops, DAC, MoA) to revise NFSM Nutri Cereals guidelines as per OMM. Niti Aayog to promote OMM model on inclusion of millets in ICDS, MDM and PDS.