Hardeep S Puri also interacted with some construction workers on the occasion, and presented them with safety helmets.

While addressing, Shri Hardeep S Puri said that the transformational impact of the National Urban Livelihoods Mission (NULM) has definitively reduced the vulnerability of urban poor households by providing upskilling and employment opportunities to urban dwellers, especially the youth. He further said that the spirit of entrepreneurship has been encouraged and supported by giving urban workers access to self-employment and skilled wage employment opportunities. This initiative will enable Nirman workers to be more proficient and skilled while making them adopt future trends in the construction industry by increasing their capabilities and diversifying their skill sets, he added.

Speaking on the occasion, Shri Puri said that he has been emphasizing on boosting the skill sets in the construction industry to be adopted on war footing but so far we have not been able to achieve what should have been done. The construction industry has been investing in skilling but it has not spread horizontally across the industry.  Therefore, the initiative taken by Ministry of Housing and Urban Affairs in this regard is really praiseworthy and should expand to cover larger number.  The Minister said that skill and productivity goes hand-in-hand and the Hon’ble Prime Minister saw it in the beginning itself. The Ministry also undertook technology challenges which led to implementation of six Light House Projects in a record time wherein technology and local material was used to construct sustainable green buildings. 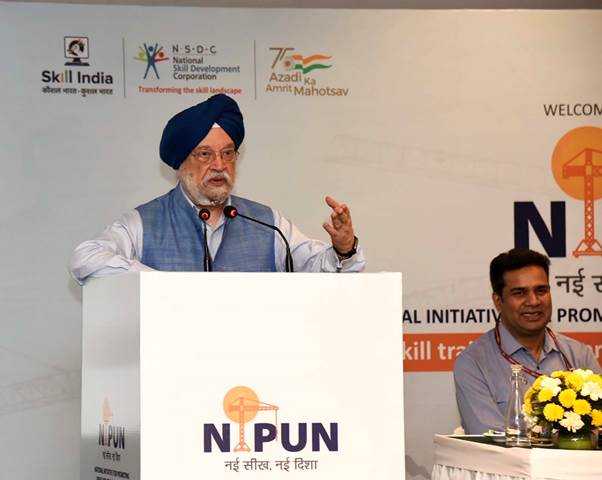 The Minister said that dedication to the nation of the main tunnel and five underpasses of Pragati Maidan Integrated Transit Corridor Project in New Delhi yesterday by the Prime Minister underlines the new template of the Central Government showing that world class project can be competed in a record time.  The Minister also announced that the Central Vista Avenue will be opened in next few days.  Shri Puri said that the construction industry is a significant contributor to the nation’s GDP and we are proud of world class construction being undertaken in the country.  He said that the NIPUN Project will enable the construction workers to seek better job opportunities, increase their wages and even pursue overseas placements –   an indication of a new eco-system.  He called upon the private sector to be more socially responsible.

The Minister said that before 2014, the urban space was under neglect. The Prime Minister saw it as an opportunity and this has led to transformation of the urbanization.  Between 2004-2014, about 1.57 lakh crores of rupees was spent on projects of Ministry of Housing and Urban Affairs which has gone up by about 8 times in the last 8 years.  The Minister said that the Central Vista will be there for the next 250 years.  He said that through suitable skilling initiatives such as NIPUN, we are creating a future labour force for the construction industry which will propel innovation and large-scale development in the country.

DAY-NULM is a Centrally Sponsored Scheme, being implemented since 2014-15, with the aim to reduce poverty and vulnerability of urban poor households in the country by enabling them to access self-employment and skilled wage employment opportunities, resulting in an appreciable improvement in their livelihoods on a sustainable basis. The National Skill Development Corporation (NSDC), the nodal agency under the Ministry of Skill Development & Entrepreneurship (MSDE), Government of India, will be the Implementation Partner for the project NIPUN.

The project implementation is divided into three parts – training through Recognition of Prior Learning (RPL) at construction sites, training through Fresh Skilling by Plumbing and Infrastructure SSC and International Placement through industries/ builders/ contractors. Onsite skill training will be provided to approximately 80,000 construction workers through industry associations under the RPL certification, co-branded with MoHUA, while about 14,000 candidates will receive fresh skilling through plumbing and infrastructure Sector Skill Council (SSC) in trades having promising placement potentials. The courses are aligned with National Skills Qualifications Framework (NSQF) and will be imparted at accredited and affiliated training centres. Under NIPUN, it is also envisaged that NSDC will place approximately 12,000 people in foreign countries such as the Kingdom of Saudi Arabia, UAE and other GCC countries.

Project NIPUN will also facilitate and support convergence with related line ministries. Meanwhile, NSDC will be responsible for the overall execution of training, monitoring and candidate tracking. It will provide trainees with ‘Kaushal Bima’, a three-year accidental insurance with coverage of INR 2 lakhs, digital skills such as cashless transactions and the BHIM app, orientation about entrepreneurship, and EPF and BOCW facilities. A project committee with members from both NSDC and MoHUA will be formed under the chairmanship of the Additional Secretary-cum-Mission Director, DAY-NULM to oversee and monitor the project.

The construction industry is poised to become the largest employer by 2022 and needs 45 million additional skilled workers over the next 10 years. To fulfil this mission, the National Real Estate Development Council (NAREDCO) and the Confederation of Real Estate Developers’ Associations of India (CREDAI) have joined Project NIPUN as industry partners and will identify training job roles of aspirational value in the construction sector in collaboration with the SSC.