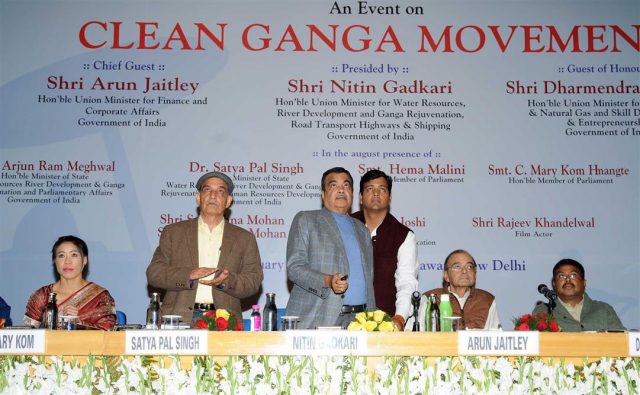 New Delhi: Union Minister for Water Resources, River Development and Ganga Rejuvenation, Road Transport and Highways & Shipping Shri Nitin Gadkari has assured that all the on-going Namami Gange projects will be completed by March 2020. Addressing an event on Clean Ganga Movement in New Delhi today, he said, he is working hard to fulfill the Prime Minister’s dream of clean and uninterrupted flow of Ganga water. He said, Rs 27,000 crore have been sanctioned for Ganga works in the last four and a half years, against just Rs 4000 crore in the last 50 years. 276 projects have been sanctioned so far, out of which 82 have been completed. Work has also begun on 40 Ganga tributaries and major drains, which will be essential for complete cleaning of the river. He said, 70 ghats out of 145 have been completed and work on 53 mukti dhams is also towards completion.

Presiding over the function Finance Minister Shri Arun Jaitley said, Clean Ganga Mission has always been at the top of the government’s priority since the beginning. This has resulted in a successful Kumbh, where people complimented the government for cleaner flow of Ganga water. He said, Ganga is the symbol of our history, culture and civilization and it is also the lifeline for thousands of fishermen, boatmen and other people living on its banks. He emphasized upon the change in the country’s character, which is evident from achieving 98% target in rural sanitation as against 38% till 2014. He contributed Rs. one lakh in Clean Ganga Fund (CGF) on the occasion.

Clean Ganga Fund (CGF) was established as a trust, for engaging corporates as well as individuals to connect and contribute, in January 2015 with the Union Finance Minister as its Ex- Officio Chairman. Contribution to CGF by domestic individual donors is eligible for 100% income tax exemption under Section 80 G (1) (i) of the Income Tax Act, 1961. Contributions to CGF also falls within the purview of CSR activity as defined in Schedule VII to the Companies Act, 2013. Total contribution received by CGF till 20th of this month is Rs. 270.41 crore. Contributions to CGF can be made, (i) through cheque / DD drawn in favor of “Clean Ganga Fund”, (ii) directly through electronic mode to CGF’s account no. 34213740838 with the New Delhi Main Branch of SBI (SWIFT Code: SBININBB104), and, (iii) through a payment gateway provided in the website of CGF which can be visited at the url: www.cleangangafund.com. A link to CGF website has also been provided in the website of NMCG which has the url: www.nmcg.nic.in. (iv) through BHIM/UPI application or by swapping a QR code which will transfer the donation to the CGF. The QR code can be downloaded from https://nmcg.nic.in/donation_form.aspx.

Many corporates companies, Banks and other institutions are supporting the cause of Ganga in different ways. Yes Bank has undertaken to display Clean Ganga message on its ATMs as well as banners conveying clean Ganga message at branches. HCL Foundation is assisting in afforestation activities in and around Gautam Budh Nagar and other part of U.P. HCL has also supported a project for plantation of Rudraksh tress in Uttarakhand in association with INTACH. Shipping Corporation of India has taken up a project for providing amenities at Katwa Ghat in West Bengal amounting to Rs. 35 lakhs. Indorama Charitable Foundation, a UK based company, have taken up a project for development of two ghats at Gangotri and Badrinath amounting to Rs. 25.65 crore. NDTV has taken up a project for development of Mural art on Ganga based themes in Uttarakhand supported by Union Bank of India. Reliance Jio network has started display of clean Ganga messages, banners and movies in their network, specially during Kumbh this year. Clean Ganga messages with an appeal to all concerned for keeping Ganga clean and healthy have been displayed on the ATM network on major banks like SBI, UBI, HDFC, ICICI, Yes Bank and Axis bank.

The Ministers electronically launched Ganga Tarini or the Floating Ganga Museum in Varanasi and Ganga Darpan or the Interpretation Centre at Sarnath. “Ganga Tarini” is the first ever mobile exhibition on the Ganga River and has been set up on a houseboat in Varanasi. Bringing alive the ecological and socio-cultural values of Ganga, an exhibition comprising of panels on the upper deck and an LFD screen for showcasing short films on the lower deck have been installed to sensitize people about the importance of Ganga and the need for its conservation. “Ganga Darpan” showcases the Ganga as a river incarnate, indispensable to the history and culture of the Indian subcontinent.

‘The Kartavya Ganga Campaign’ song, developed by Shri Prasoon Joshi and sung by Shri Shanker Mahadevan was launched on the occasion and received a thumping response from the audience.

The launch of the ‘Pravasi Ganga Prahari Program’ to support the Clean Ganga Fund and connect with NRIs, Foreign Nationals with an interest in conservation of Ganga was another highlight of the program. A group of business and individuals from Mumbai donated Rs 1.35 Cr and additional donations were received from various domestic and international contributors during the program. Entire faculty and members of Wildlife Institute of India (WII) have contributed one day salary to the Clean Ganga Fund. Books ‘Biodiversity profile of the Ganga River’ and ‘Conservation Reference Guide’ on aquatic animals of Ganga were also released on the occasion.