Dubai: After successful execution of 16 league matches consisting of 9 Odia Cricket teams all over UAE, 4 teams qualified to the Semifinal from 2 groups:

OB won the toss & Captain Chinmaya elected to bat first. OB batsmen took to the pitch with an aim to set a high score for FOA to chase. But FOA with their strong bowling attack and known for their brilliant fielding, restricted OB to 109 runs taking 9 wickets in allotted 20.0 overs. Pabitra was the highest scorer from OB with 25 runs in 34 balls got a supporting hand from Smruti (18 runs in 20 balls) and managed to take OB to a respective total! FOA displayed exemplary bowling skill and their bowlers took OB wickets in regular interval. Biranchi from FOA took 4 wkts by giving away a paltry 6 runs in 4 overs with 1 maiden over; Srikant, Pintu, Krupa & Arup acquired 1 wkt each. 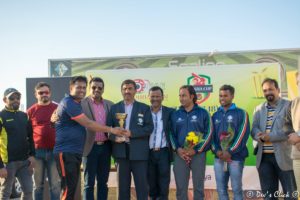 In return FOA facing a small target of 110 runs in 20 overs with RR of 5.5 suffered a batting collapse and quick dismissal of their top order batsmen added to their woes. Except Srikant (23 in 26 balls) & Sachikant (16 in 20 balls) no other batsman could reach double digit figure! OB bowlers restricted FOA team with their meticulous line length bowling to merely 87 runs in 19.3 overs taking all 10 wkts. Zahid of OB took 3 wkts for 12 runs and adjudged man of the match. Rajendra took 3 scalps conceding 35 runs. Akif & Manoj also chipped in with 1 wicket each. Pabitra displayed his fielding prowess with 2 run outs. With this victory, OB became the first finalist of Odisha Cup 2017-18.

Zahid of OB received the man of the match trophy from Guest of Honor Mr. Madhusudan Sarangi. He has congratulated Odisha Cup organizing committee under OSUAE for the great initiative. He also suggested making the Odisha Cup a global tournament for all Odia. He has expressed his gratitude towards all the players of both participant teams & organizers too for encouraging Odia brotherhood all over the UAE. Odisha Cup created a world record by organizing a cricket tournament outside India consisting of 9 Odia teams and there by registered their name in the history.

On return OSA, known for their strong batting lineup chasing a low score of 94 runs to win, faced quick dismissal of opener batsman Farzan (5). KB managed to get wickets on regular interval and did not allow OSA batsmen to settle down at all. At one stage OSA were 26/5, Shanakar & Rehman then steadied the batting and formed a partnership of 27 runs. Shankar again got into a partnership of 27 runs with Rajdeep to take OSA into a great position. But KB bowlers with spectacular display of spin and pace bowling troubled OSA batsman but at the end it was Rajdeep (18*) & Hakim (7*) brought victory to OSA in 18.5 overs. OSA achieved a historic win by 3 wkts against a strong KB team who was one of the title contender. OSA with their determination and positive attitude made it through to the final of Odisha Cup 2017-18. Pradyumna fro KB took 2 wickets by giving away 28 runs. Rajendra, Birendra & Nalini bagged 1 wkt each. With this victory, OSA has entered into Odisha Cup 2017-18 final as 2nd finalist.

Rajdeep from OSA was adjudged man of the match for his all-round performance (18* runs in 26 Balls & 1 wickets for 12 runs) & trophy has been awarded to him by our Guest of Honor Mr. Sushant Panda. He has congratulated Odisha Cup organizing Committee for the great initiative. He has expressed his gratitude towards all the players of participant teams & organizers as well for encouraging Odia brotherhood all over the UAE.

We were privileged and honored by the presence of Cricket Association for the Blind in India (CABI) officials & players during our semifinal matches.  The next day on 20th Jan team India also won the Blind Cricket World Cup – 2018 at Sharjah Cricket Stadium against arch rival team Pakistan.

Odisha Blasters (OB) & Odia Samaj Abudhabi (OSA) will clash with each other on 9th February’2018 at Ocean Fair Cricket Ground (Greenfield Community School), Dubai (DIP-1). All the advisors & organizing committee members of Odisha Cup has requested all the Odias & Cricket lovers staying in UAE to be present to cheer up two finalist teams and witness the enthralling final match and enjoy Odia cuisine as well.

Odisha government declares holiday for all schools, colleges today due to hartal