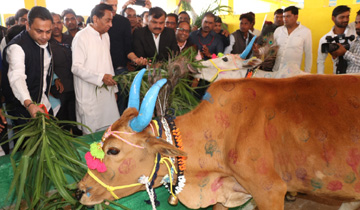 Bhopal : Chief Minister Shri Kamal Nath has said that government is working on the goal that along with the protection of bovine, Gaushalas should become a means of generating income in rural areas. He said that cowsheds are being constructed in all panchayat headquarters across the state. We have fulfilled this promise made in the manifesto soon after the formation of the government. Shri Kamal Nath was inaugurating the model cow-shed costing Rs 30 lakh at Umarhar village in Chhindwara district today.

The Chief Minister said that the government is committed towards protection of cows. He said that along with promoting organic farming with Gaumutra and cow-dung, marketing of their various products will also be promoted. This will increase the income of those connected to cow rearing. He said that according to the promise made in the manifesto, the government is constructing cowsheds in the entire state in a systematic manner. The Chief Minister said that 31 cowsheds will be built in Chhindwara district.

Chhindwara model is the basis of state’s development

Shri Kamal Nath said that the state government is working with a new attitude and approach for the development of the state. He said that Chhindwara model has been made the basis of development of the state. On this line, development initiatives have been taken in all areas. An investment-friendly environment has been created for employment, which has started yielding results. For this, the processes related to industry establishment have been simplified. This has increased the confidence of investors in Madhya Pradesh. The Chief Minister informed that efforts are being made to improve the level of education in order to connect youth with employment and self-employment. Also, schemes related to the needs of farmers and general public are being formulated. He said that this government wishes to win the confidence of the people by working at ground-level instead of making announcements.

Public Health Engineering Minister Shri Sukhdeo Panse said that the government is working in line with the faith of the general public. In the one-year tenure, 365 points of the manifesto have been fulfilled. Apart from loan waiver of farmers, relief in electricity bills and double pension amount, the amount of Kanyadaan Yojana has also been increased to Rs 51 thousand.

MP Shri Nakul Nath said that Gauseva has not only been our tradition but is our responsibility too. The state government has speeded up construction of Gaushalas. Special attention is being paid to bovine protection and promotion, which will make every village of the state Mathura, Vrindavan.

The Chief Minister viewed the modern style demonstration of pesticide spray through drone on the occasion. He honoured the self-help-groups Sangam and Ahilya for outstanding performance in agriculture sector by presenting them with Rs 2.50 lakh and Rs one lakh respectively. In addition, Shri Rahul Vishwakarma was presented with letter of approval of Mukhya Mantri Swarozgar Yojana.