Flight on Keshod-Mumbai route under RCS UDAN flagged off

New Delhi: Ministry of Civil Aviation commenced the flight operations yesterday(16.04.2022) on Keshod-Mumbai route under RCS-UDAN scheme of Government of India. Alliance Air was awarded the route under the UDAN RCS-4.1 bidding process. With this, 417 routes would be operationalized under the UDAN-RCS scheme.

The airline will operate thrice a week flights on Wednesday, Friday and Sunday & will deploy it’s ATR 72-600, 70-seater turbo prop aircraft designed for shorter distance flights on the route. With this, Alliance Air will become 1st airline to connect Keshod to Mumbai under UDAN.

Speaking on the occasion, Shri Jyotiraditya M. Scindia said, “I feel blessed and honoured to be in Gujarat especially in Keshod which has a place in our history and with this new UDAN flight that we are starting today will connect the place which was beloved by our Father of Nation Mahatma Gandhi with the financial capital of our country. 2 famous world-renowned tourist attractions – Somnath Temple and Gir National Park are located near Keshod. With the launch of new route, tourist will be able to visit both easily. Apart from this, various industries are established in Keshod such as furniture, textile, chemicals, cement etc which will also be benefitted from the commencement of new flight route.” 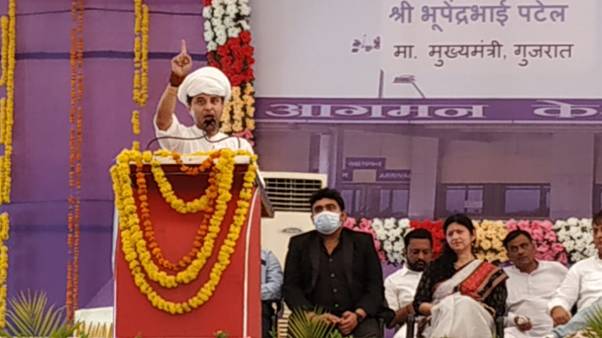 Talking about the development plans of Ministry of Civil Aviation in Gujarat, Minister elaborated “Apart from starting the new flight route today, we will also connect Keshod with the state capital Ahmedabad. In this year summer schedule, Ahmedabad has been connected to 3 cities in India – Amritsar, Agra and Ranchi. Similarly, Porbandar and Rajkot have been connected with Mumbai. 2 new greenfield airports are also be constructed in Hirasar and Dholera which will have 23 lakh passengers per year and 30 lakh passengers per year with a budget allocation of INR 1405 crore and INR 1305 crore respectively”. A special route connecting Porbandar and Delhi will start on 27th April, informed the Minister of Civil Aviation.

Keshod Airport is owned by Airports Authority of India (AAI). Initially, the airport was refurbished and revived in late 1980s to facilitate scheduled operations. Since last 21 years, commercial aircraft has not landed at this airport.