Kandhamal Progressive Forum chief and founder of Kandhamal Literary Festival Barendra Kumar give introduction about the Kandhamal Literary Festival. He said it will inspire the youth to explore their inherent creativity. Kandhamal is famous for its natural beauty, indigenous culture, and simplicity in social lifestyle and behavior. These are pristine qualities for any thinker, philosopher, writers, and poets. Gopal Corporation Limited is the title sponsor of the event.

KLF Founder Rashmi Ranjan Parida declared that Kandhamal Literary Festival will be held every year last week of November. He said the Festival will explore the interconnections between nature, culture, and literature and locate Kandhamal’s place in Odia literary imagination. He said the moto is to promote indigenous literature and culture of the region. He  thanks Gopal Corporation Limited for supporting KLF and other outreach activities of KLF.

KLF co-founder  Sitansu Mohapatra added that the objective is to promote Kandhamal in Odisha and in India, as a destination of nature, beauty, and creativity and also to show that Kandhamal is ready to engage and have a dialogue with the creative world. He further added “Kandhamal has many things to offer. It has been a silent inspiration for many in the valley. We want to explore the interconnections between Kandhamal with Odisha’s literary history and celebrate Kandhamal’s rich artistic and cultural heritage. 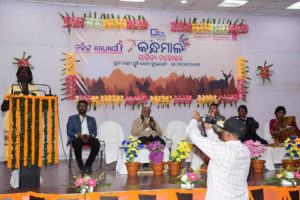 KLF co-founder Kamalakanta stressed that in coming year Kandhamal Literary Festival will see both national, international, young and seasoned writers on one platform. The effort is to popularize literature among the youth of Kandhamal while paying respect to the seniors who have kept the creative tradition of song, dance, and writing alive. 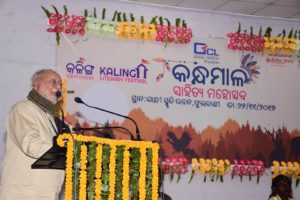 The One-day festival had four sessions. Poets, Writers, and Public Intellectuals discussed and analyze several aspects of Kandhamal and how best the region has been represented in Odia and other literary traditions. A photographic exhibition organised to showcase the nature, beauty, and culture of the region. The festival had  a dedicated poetry recitation session by leading poets of Kandhamal region. Local talents, both, young and seasoned, felicitated for their inspiring work in different segments of life.