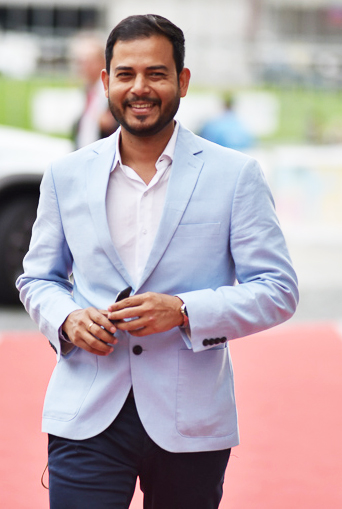 New Delhi: Delhi based, Odisha born Film producer & promoter Jitendra Mishra has been selected jury for the ”18th International Festival Of Cinematographic Debuts – Spirit Of Fire” in Russia” this year. The festival is hosted in various locations of Russia, Siberia, Khanty-Mansiyak region where Jitendra is a part of the International children & youth film competition jury panel, he will be travelling for this job from 1st March to 10th March 2020.

The International Festival “Spirit of fire” was started in 2002 and more than 50,000 spectators attend the cinema program. The competitive section is evaluated by the international jury consisting of 5 major figures of international cinema. There are four international awards secured with monetary renumeration. During the festival, there is constantly working professional club that has always provided a unique cultural program that includes exclusive performances of outstanding performers of classical rock and pop music. The festival also includes annual photographic and visual exhibition.

Born in Titlagarh, Odisha, Jitendra Mishra is one of the few Indian film Producers & promoters who have been able to create a benchmark in ‘Alternative methods of Film Production, Distribution & Promotion’ at international level. Committed towards meaningful cinema, Jitendra has already been associated with the production, distribution and promotion of more than 110 films in various categories in different capacities. Many of them have got worldwide acclamation and recognition. His recent production ‘The Last Color’ directed by Michelin Starred Chef Vikas Khanna had a special screening at the most prestigious United Nations headquarter & at Cannes film festival, Marche du film section recently and received global appreciation. As of now the film has already been selected in more than 30 international film festivals and received more than 10 different awards and nomination in various categories. Jitendra has been the festival director of Smile Foundation’s film festival & forum ‘SIFFCY’ (Smile Int’l FF for Children & Youth) since it’s inception.

“I feel honored and thankful to the executive committee of “Spirit of fire” & especially Ekaterina Bordacheva for the invitation. I am super excited as I am hoping for an unique cinematic experience in the chilling Siberian region  I have always been privileged as I get to watch best of the world cinema when I travel as a Jury and ultimately it helps us curate them for our own festival SIFFCY. It also gives me opportunities to learn global practices, exchange ideas among the global industry leaders & implement them in our own endeavors, I am also thankful to the management of Smile Foundation for the continued support & guidance,” said Jitendra on this occasion.

Awarded with the prestigious ‘Son of Odisha’, ‘Young Jury, ‘Youth Icon’, ‘Youth inspiration’ and many other national & international awards, Jitendra Mishra is also an elected Board of Director for the most credible and oldest children & youth media network CIFEJ, an active member of the Cannes producers’ network and also been selected Jury for many leading international film festivals & forums.

Arjan Bajwa gets great appreciation for a powerful performance in his first digital web series, Zee 5’s State of Seige 26/11