Farmprenuer icon of North East India –Success story out of initiative of NERCRMS, a registered society under the aegis of UNDER THE Ministry of DoNER

New Delhi : In Ukhrul district of Manipur, the agro-climatic conditions are favorable for the cultivation of Apple. In the year 2019, the low chilling varieties of Apple were introduced in the Ukhrul district by North Eastern Region Community Resource Management Society (NERCRMS), NEC, GoI in association with the Institute of Himalayan Bio-resource Technology (CSIR-IHBT), Palampur, Himachal Pradesh. The initiative received an overwhelming response from the farming community and as well as from the various government and non-government agencies.

Under the initiative, Smt. Augustina Awungshi Shimray, a resident of Poi Village, Ukhrul, Manipur, was chosen as the beneficiary for the apple cultivation. She was one of the farmers who received the training at the Institute of Himalayan Bio-resource Technology (CSIR-IHBT), Palampur, Himachal Pradesh. Following the capacity-building support, Smt. Shimray successfullygrew apples in her orchard. Her first yield, she grew nearly 160 kg of Apples which she sold at a lucrative price of Rs. 200/- perkg. 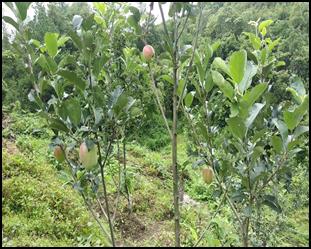 Inspired by her success, few more farmers took up apple plantation. For her exemplary efforts, the Hon’ble Chief Minister of Manipur Shri. N. Biren Singh felicitated her. Later, she also received financial support from the state government to train Apple Cultivation and its post-harvest management.

Smt. Shimray has expressed her sincere gratitude to NERCRMS, NEC, GoI for transforming her life and enabling her to become economically self-sustainable. Today, she has realised a new meaning of Atma Nirbharta and her story is an inspiration to the entire farming community of North East India.

Villages in Meghalaya without access to roads and markets