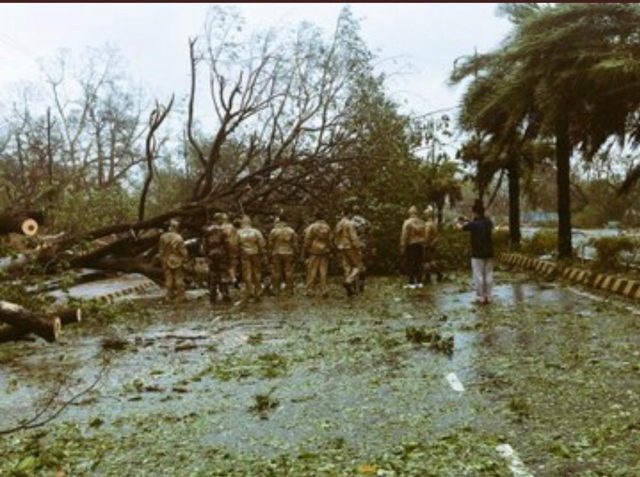 By Charudutta Panigrahi
It is as if we, only the Odias or Odisha related communities who lament the hit of FANI in our lives. No one outside is aware of the vandalization. Major losses have happened to our beautiful city
Bhubaneswar, to our temple city Puri, our holy district of Puri, the wonderland of Konark, the global heritage site, and 14 out of our 30 Districts have been extremely affected. Half the state has been
ravaged – 159 blocks, 52 ULBs, 18168 villages, 16.53 million population (about 36% of total population of the state) and 5,08,467 houses have been damaged. Not to mention about a crore of livestock casualty and affliction.
(Source: Indian Red cross Society Report)
With such huge damage, Odisha would be pulled back by at least a decade in development. India is poised to become a $10 trillion economy by 2035 and Odisha is to play a vital role in the nation’s
growth leap. After Maharashtra and Tamil Nadu, Odisha has the potential to be the third State to be a $1 trillion economy. But with severe disasters, numbering more than four in the last eighteen years, Odisha and India are being scathed time and again.
Super cyclone of 1999, Phailin of 2013, Hud Hud of 2014, Titli of 2018, the gallery of disasters, have  spelt unimaginable disaster for the state and the country. It is not only about the immediate impact of the disaster but also the sustained loss in livelihoods that compels low income communities to migrate. This migration creates imbalance in the cities like Mumbai, Gurgaon, Bangalore, Pune, Kolkata and across the country. The cities are stressed and so are the farmlands in rural areas. The joblessness becomes unavoidable and the farm production takes a dip which is often difficult to restore even in 5-6 cropping cycles. So, a disaster of this magnitude follows a series of deep running, household level setbacks. The psyche of the people is irrevocably dented. Families disintegrate and the rural skyline slumps into misery. How would the state aim to grow at 8% per annum and would even dream to become an ideal investment destination. Without investments, where would we create sustained new employment opportunities for the youth, who constitute 42 percent of state’s 4.2 crore
population? Do we leave the youth in the lurch, to fend for themselves and almost force them to choose short cuts in life? Won’t this directly affect the moral fabric of Odisha and India? It is a mission to transform India — to transform Odisha. We need to hold hands to balm the bruises. The infrastructure needsto be rebuilt immediately. We have to bounce back to life and in gusto. The media plays the most important role in the entire disaster cycle – from covering the damages first hand to policy advocacies to making management and mitigation of disasters strategic, and to put the disaster map globally which would ultimately bring about unison in facing, braving and handling such calamities with better technologies and resources. Odisha needs support.

Media is the only medium which is all encompassing and empowered to bring people to situations and democratising development under restraining conditions. But surprisingly the national media’s response to FANI was lukewarm, to say the least. There was virtually no coverage in the national media
on FANI. The executive, legislature and the civil society felt strongly about the absence of Odisha’s FANI story in the national media. We don’t know whether this scale of disaster qualifies for the “national disaster’ tag or not, but we know that Odisha FANI was almost blacked out. At least the Odia or Odisha-centric media personalities and professionals could have showcased the severity of the damage. There were no chat shows, no activists speaking on national Television, no splash of FANI led damage in the print media. The value of human lives has been taken for granted. Even the Odia media professionals have been tight lipped and perhaps unmoved so far. The crying baby needs to be heard.
We think that the media generally assume that news of war, crime and natural disasters will always win an audience. “If it bleeds, it leads,” is a well-tried adage of American journalism. But media chose other items to peddle this time. The national media houses who have professionals posted in Odisha should answer why their editors were not sensitised enough by them to give space of Odisha FANI coverage. If they are not with us during our trial times, should we continue patronising them? Odia
brethren in the media were conspicuously tuned off. It is now over a fortnight and FANI devastation is passé.
Last week I was in Geneva, speaking at a policy meet. I took the opportunity to incorporate FANI, with the hope of exploring assistance in health space. But all I could collate was some poor coverage which is embarrassingly stereotyping. Media coverage of FANI could have been largely accepted as an accurate reflection of what really happened. But the experience this time has been different. In the now, delayed reporting we are exposed to a lot of stereotyping: there are similar images of wrecked houses, half-submerged houses and last-minute rescues and mountains of photographs of volunteers, politicians in suitable poses at the right places.
National visibility is required for a national calamity. Mere regional or local representations and politicking would do the communities no good. In my estimate FANI has battered about 1.75% -2% of
the state’s GDP. Tracts of farm land have been rendered useless, at least for the next three years. This is the time, when we should all be speaking about reconstruction and rehabilitation. Livelihoods should be taken up on priority at the last mile. Mere loaning is not the answer. That is an escape route to further plunge the communities to indebtedness. If that warrants FANI to be declared a national disaster, then let’s work towards that goal. Let’s walk to the Parliament or to the President or to the
Prime Minister and present our charter, our woes. Let’s move away from our slumber and do whatever possible and ethical to drive resources to Odisha.

O Media of this country and O Odias in the Media, please help!
If Odisha gets attention, so would the lives of our hapless siblings and so would your work.