After Effect Of Titli: Least Disaster Preparedness In Rayagada, Emergency Services Yet To Be Fully Restored

Report by Badal Tah; Rayagada: Though there was an early warning of heavy rain in Rayagada by the State Relief Commission(SRC), Rayagada district administration seemed not to have enough preparedness to combat Titli. After the land fall at Andhra Pradesh coast, as announced by SRC, the tempest Titli wrecked havoc in Gajapati district, which is adjacent to Rayagada. Though under the leadership of Sri Amrit Rituraj, IAS, Sub-Collector, Gunupur took preventive measures, the district, as a whole, lacked disaster preparedness. The probability of extension of the tempest fro Gajapati to Rayagada was ignored by the district administration leading to colossal loss to emergency services like electricity, communication, drinking water, health facilities in district headquarters hospiutal, PHCs and private nursing homes.

There was no proper announcement regarding the gravity of the probable tempest Titli. On the other hand, prior to the day before the Titli, the administration was busy in organizing CM induced Ama Gaon Ama Bikas in Kolnara block, foundation laying ceremony of District Amala Sangha, concept sharing for city development in a Hotel Tejaswi, etc. “These events are important, but should not have been the priorities of district administration in the context of the ensuing heavy rain and the tempest. Those events could have been either postponed or cancelled like that of closure of schools and cancellation of college elections and buses and trains. This is nothing but insensitivity of the district administration”, said Sri Basant Ulaka, a local tribal youth leader of the district.

During hudhud and phailin earlier, as the contingent plan was sound, the restoration work took time as planned. Till writing of this report, the normalcy has not yet been restored in the town. Most of the residents of the Rayagada town are still to avail basic services like electricity and water. The fuel bunks are operating manually. The villages around Rayagada like Siriguda, Kotlaguda, Barijhola, etc are devoid of electricity. Residential schools like Ekalabya Model Residential School(EMRS) at Barijhola, where around eight hundred tribal boys and girls reside, are under duress. Train services at Muniguda and Dahikhal stations were disrupted due to huge tree falling on the track.The tents and arrangement for Durga Puja festival by JK papers limited are highly damaged. 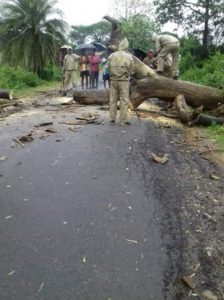 Though the fire department, PHED, Municipality and SOUTHCO swung into action after the tempest, a contingent plan could have been more helpful. Hundreds of trees have been uprooted leading to a catastrophe in avenue plantation. The standing crops and vegetables have gone to dogs. Blocks like Gunupur, Kolnara, Bissam Cuttack, Padmapur, Ramanaguda, Muniguda and villages bordering AP like Kereda, Hat Seskhal, Pitamahal, Gajigam, Jagannathpur in Rayagada are highly affected. The devastation in agriculture is mammoth in nature, which needs proper damage assessment.