“Education is the key to the empowerment of every individual, including persons with disabilities” – Droupadi Murmu

New Delhi : The President of India Smt. Droupadi Murmu was the Chief Guest at a function to celebrate “International Day of Persons with Disabilities” organized by the DEPwD, Ministry of Social Justice & Empowerment here today. She conferred the National Awards on Individuals, Institutions, Organizations and State/District etc. for their outstanding achievements and work done towards empowerment of Persons with Disabilities (PwDs). Union Minister for Social Justice and Empowerment Dr. Virendra Kumar, Ministers of State for Social Justice & Empowerment Shri Ramdas Athawale, Ms Pratima Bhaumik were also present in the function.

National Awards for the Empowerment of Persons with Disabilities for the year 2021 and 2022, were given under following categories:-

The President said that in Indian culture and tradition, disability has never been considered as a hindrance in acquiring knowledge and achieving excellence. Often, it has been seen that Divyangjan are gifted with divine-qualities. There are innumerable examples in which our Divyang brothers and sisters have achieved impressive feats in many fields on the strength of their indomitable courage, talent and determination. Given enough opportunities and the right environment, they can excel in every field.

The President said that the government is taking several steps for the empowerment of Divyangjan. She said that, according to her, inculcating self-confidence in Divyangjan is very important to empower them. People with disabilities have talents and abilities just like normal people, and sometimes more than them. To make them self-reliant, it is only necessary to instil in them self-confidence. She urged all sections of the society to motivate the Divyangjan to become self-reliant and move ahead in life. She said that when our Divyang brothers and sisters would make their effective contribution by joining the mainstream, then our country would move forward on the path of development at a faster pace.

While addressing the event, Minister of Social Justice & Empowerment, Dr. Virendra Kumar said that the Divyangjans are valuable human resources and the Prime Minister gives priority to the issues of persons with disabilities in the National Development Agenda. His motto is”Inclusivegrowth, development of all and confidence of all”. The Government has enacted the Right to Persons with Disabilities Act, 2016 which came into effect from 19.04.2017. The Act provides for 4% reservation in government jobs for persons with disabilities.

He also said that the Sugamya Bharat Abhiyan (Accessible India Campaign) was launched by the Government on03.12.2015 to provide universal accessibility to persons with disabilities so that they can live a meaningful life with dignity. Public buildings, transport system and information and communication technology have been included under this campaign. Keeping in view the problems related to accessibility faced by the masses, the Department hasdeveloped a Mobile APP to address those problems in a quick and systematic manner as possible.

The Government has set up Indian Sign Language Research and TrainingCentreto promote the empowerment of hearing-impaired persons and to create sign language in India. The Institute, among other functions, is continuously preparing sign language dictionaries that have so far included more than 10,000 words.

In addition, he said that the Government is implementing a unique Disability Identity Card project with the objective of creating a National Database for Persons with Disabilities. So far, over 84 lakh UDID cards have been prepared in 713 districts of all states/UTs.

The Government is also establishing a Centre for Disability Sports Centre at Gwalior and National Institute of Mental Health Rehabilitation at Sehore, Madhya Pradesh.

Dr. Virendra Kumar also informed about the ‘Divya Kala Shakti’ which is being organised by the Ministry to showcase the talent and skills of Divyang youngster and children.

Shri Rajesh Agrawal, Secretary, DEPwD and Senior Officers of the Department of Empowerment of Persons with Disabilities were also present in the function. 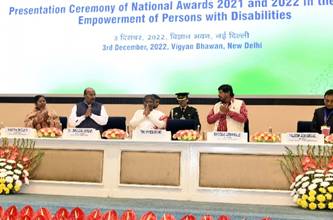 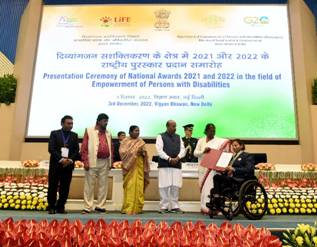