New Delhi : “For the first-time health is being linked with the agenda of development under a holistic approach undertaken by the Union Govt. The pandemic period has provided us an opportunity to strengthen our healthcare infrastructure and delivery systems”. This was stated by Union Minister for Health & Family Welfare Dr Mansukh Mandaviya as he chaired the eighth meeting of Mission Steering Group (MSG) of National Health Mission (NHM), here.

The MSG is the apex decision-making body of NHM that takes decisions on policies and program implementation under the Mission. Secretaries of Ministries of Government of India including MoHFW, AYUSH, School Education & Literacy and senior officers from WCD, Tribal Affairs, Finance & Expenditure, Panchayati Raj, Health Secretaries of State Governments and eminent public health professionals also attended the meeting.

Highlighting the achievements under NHM, Dr Mandaviya stated that “Exceeding the target of 1.50 lakh Ayushman Bharat- Health & Wellness Centres (AB-HWC) by 31 December, 2022, more than 1.54 lakh Sub Health Centres and Primary Health Centres have been transformed as AB-HWCs. In sync with the approach of the National Health Policy 2017 (NHP 2017), AB-HWCs are providing comprehensive primary healthcare closer to the communities. As many as 12 health services packages are available free-of-charge.” He further stated that more than 135 crore footfall has been witnessed at the HWCs.

Dr Mandaviya stressed that while we need to understand global healthcare systems and their best practices, “India can have its own healthcare model which would be aligned to its regional requirements, and customized to the local strengths and challenges”. Moving with the philosophy of Antyodaya, the Government aspires to provide affordable, accessible and quality healthcare services to each individual in every corner of the country, he emphasized.

The MSG was informed about the ‘Holistic Approach’ adopted by NHM encompassing change in programme design to respond to changing health care needs. This includes working with a Saturation Approach; shift from Incremental to Comprehensive approach (Ayush, Tertiary Care & Expanded package); enhancing self reliance through Diagnostics, Drugs & AI; creating a National Digital Health Ecosystem and future ready & resilient health systems; and shift from MDGs to SDGs.

The MSG was apprised about the achievements made under NHM during the past few years:

– Technical specification and draft guidelines of HPV vaccine has been approved.

– 30 Crore ABHA IDs have been created so far and integrated with the National Digital Healthcare Ecosystem.

– Around 20 Crore AB-PMJAY cards have been created

– The Pradhan Mantri National Dialysis Program (PMNDP) has been implemented in 630 Districts of 36 States/UTs.

– Tertiary services are gradually being provided in district hospitals as well.

– Over 9 lakh TB patients adopted under the Nikshay Mitra initiative.

– Jal Jeevan Mission has had a significant impact in reducing Malaria cases in the last 4-5 years. 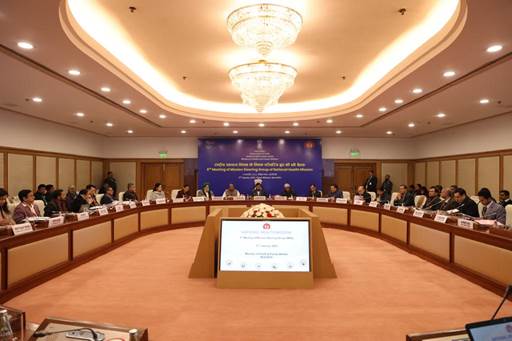 The 8th MSG of the NHM discussed various agenda points including confirmation of minutes of last meeting of the MSG. The Action Taken Report on decisions taken during the 7th meeting of the MSG were discussed and it was decided to implement a saturated and thorough approach that encompasses all aspects of health and has a noteworthy reach and impact on the community. Commending the progress under the Nikshay Mitra initiative, the Union Health Minister emphasized on the need to eradicate TB by 2025 as per Hon’ble Prime Minister’s vision of achieving the target of TB Elimination target by the year 2025. The MSG also deliberated upon increasing focus towards preventive and promotive health approach that advocates for a holistic wellness outlook in the community. The dignitaries deliberated on the proposition of each medical college mentoring 10 AB-HWCs each which would then go on to become models for other AB-HWCs to emulate. This would assure quality comprehensive healthcare services in the primary sector. Additionally, the MSG discussed strengthening of the national healthcare ecosystem and stressed on adoption of new technologies to upgrade and strengthen the existing healthcare infrastructure as part of new initiatives under NHM.

The member Union Ministers appreciated progress made under NHM through focused programmes and support provided to states over the years. Several suggestions were offered including on the approach to elimination of diseases like cervical cancer, increasing the number of AB-HWCs under Medical Colleges, need for a more detailed analysis of the urban health sector, and enhancing synergy between Centre and States for timely matching fund allocation from the latter.

Dr. Mansukh Mandaviya noted that the decisions taken in meeting of MSG will help in giving impetus to delivery of healthcare services at all three levels of healthcare – primary, secondary and tertiary. The feedback and suggestions from the meeting would be considered to guide the roadmap on interventions to be taken up, he said.