Hitting out at the Opposition Parties for following a policy of appeasement to the extent of being inhuman, Union Minister Dr Jitendra Singh said in Kathua today that these parties not only discriminated between one section of people and the other section but they also went to the extent to discriminating between LoC (Line of Control) and IB (International border) purely for vote considerations.

Addressing a large public rally after laying the foundation stone of central PMGSY road from Bakhta to Magloor in Jalota area of district Kathua, Dr Jitendra Singh said, the Governments of Opposition Parties  crossed all limits of ethics and propriety when they allowed reservation for people living along LoC in district Kathua and Poonch areas from where they got their MLAs elected, some of whom also became the Ministers but, denied the same benefit to the people living along IB or Pakistan Border mostly in Kathua and Samba districts because the people here did not vote for them. He said, this discrepancy was corrected only after the Modi government came to power and the people living near the IB were also given justice by granting 4% reservation on the lines of the people living along LoC.

On the occasion, Dr Jitendra Singh also announced the setting up of a satellite hospital, Tata Cancer Centre at Kathua. This, he said, will provide the latest hi-tech facility for cancer patients from J&K, Punjab and Himachal Pradesh.

Dr Jitendra Singh said in the last 7-8 years, while nearly 200% roads constructed in the constituency. He said, for 70 years, Keedian Gandyal bridge was not constructed because it benefited a mere 2000 population but we had the courage of conviction to construct a bridge for these people at a cost of over Rs.150 Crore.

Similarly, he said, along the route of the holy Machil Yatra before 2014 there were neither toilets nor mobile connectivity nor electricity because these people did not figure in their list of vote bank. It is this government which set up toilets and mobile towers there, and recently sanctioned one exclusive solar power plant for the village, he added.

Referring to one of the first Industrial Biotech Parks which has been set up in Kathua, Dr Jitendra Singh said gradually over a period of time when start-up culture picks up in the region and attraction of livelihood arrives here, the children of the next generation will realise its value and worth.

Dr.Jitendra Singh also referred to one of the country’s first monument to be named after Syama Prasad Mookerjee at Chenani-Nashri Tunnel and said that it will be a testimony in the history because Shyama Prasad Mukherji was arrested at Kathua and taken for his last journey of life to Srinagar through the road located.

Thanking Prime Minister Modi, Dr Jitendra Singh said, not only national level projects moved on fast track but several held up projects were also picked up by this government. While the Shahpur Kandi project was revived after 40 years, the Ujh-multipurpose irrigation project which was conceived for the first time during Maharaja’s rule is also set to take off very soon. 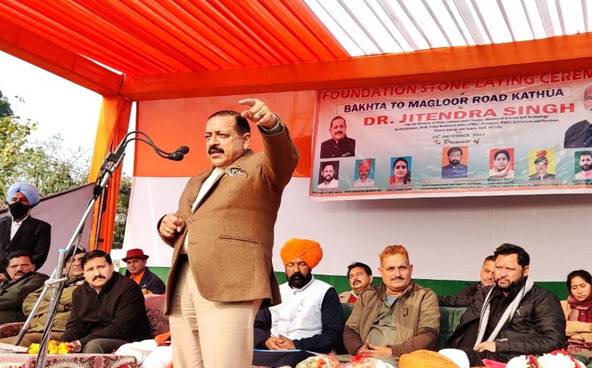 Amit Shah addressed the program organized to celebrate 95 years completion of Sheth G C High School in Mehsana, Gujarat and congratulated the school on the achievement

Department of Empowerment of Persons with Disabilities : DEPwD signs MoUs with Amazon and Flipkart for the first time with anaim to create a structured skill development mechanism for mainstreaming of PwDs into the mainstream economy