New Delhi : Union Minister of State (Independent Charge) Science & Technology; Minister of State (Independent Charge) Earth Sciences; MoS PMO, Personnel, Public Grievances, Pensions, Atomic Energy and Space, Dr Jitendra Singh, who is also Chairman of the Indian Institute of Public Administration (IIPA), today announced the setting up of Dr. Rajendra Prasad Memorial Award in public administration in the field of academic excellence, in memory of the first President of India who had also laid the foundation stone of the IIPA building complex in the national capital.

While presiding over the 320th meeting of the Executive Council of IIPA, Dr Jitendra Singh congratulated the Director General and staff of IIPA for receiving the ISO 9001:2015 certification and said, this speaks volume of the excellent work being done by this premier training institution of the Government of India. 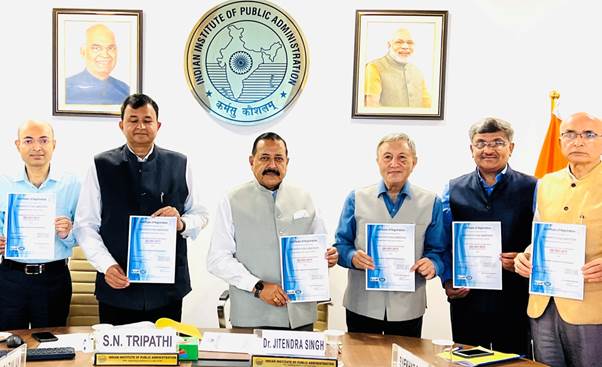 The Union Minister also suggested a one-day visit of the Assistant Secretaries to the Government of India, to the Indian Institute of Public Administration to have a firsthand understanding of the training programmes being undertaken by it. He also opined that visits of the officers of friendly neighbouring countries like Maldives, Bhutan, Nepal, Sri Lanka etc to IIPA should also be organized.

The Union Minister said that the institute has to have a futuristic vision for the next 25 years to attain the goals set by Prime Minister Narendra Modi and, to achieve this, the institute needs to have an integrated approach to work in cohesion with similar departments/organizations/set-ups and entities with similar scope and focus, related to training, administrative expertise. The Minister said that IIPA has the capacity and it needs to continue performing by having an enlarged pool of experts and a wide spectrum of activities.

The Minister was apprised of the action taken on the minutes of the 319th Meeting of the EC held on 27th September, 2021.

The IIPA’s Executive Council has the Hon’ble Vice President of India, Shri M Venkaiah Naidu as its President and Union Minister Dr. Jitendra Singh, as chairman.

India is a mother of all democracy, says Prime Minister Narendra Modi addressing the…