New Delhi ; The President of India, Droupadi Murmu, presented the National Awards for the Empowerment of Persons with Disabilities for the year 2021 and 2022 in New Delhi on Saturday (December 3, 2022) on the occasion of the International Day of Persons with Disabilities. The President said that in Indian culture and tradition, disability has never been considered as a hindrance in acquiring knowledge and achieving excellence. Often, it has been seen that Divyangjan are gifted with divine-qualities, the President had further stated yesterday. This has been practically proved by five divyang citizens from the state of Maharashtra who had also received awards from the President along with other winners yesterday.

Thane resident, 54 year old Ashok Tukaram Bhoir is a sportsperson despite having locomotor disability of 75% since birth. He still has excelled in Shot Put, Javelin throw and participated in four international; events between 2018-21. He has also excelled in his chosen field of business Event Management and Decoration Services and has provided employment to differently-abled in society.

In recognition of his outstanding achievements in the field of social work, Ashok Tukaram Bhoir has been honoured with the National Award for Individual Excellence 2021 in the category of Sarvshrestha Divyangjan.

A lady whose locomotor disability of 42% did not hold her back from taking care of other’s heathcare needs. The 56-year old is working as Lady Health Worker in the Primary Health Centre of Pune District. During 36 years of working in the Health Department, she has done excellent work in vaccination, pulse polio dose distribution and other health related programmes including during COVID-19 in the rural areas of Pune district. An Ayurvedic Doctor and social worker whose disability of blood disorder (Hemophilia of 55%) since birth could not deter him from providing social service in medical field. The 46 year old from Pune is engaged in the propagation and dissemination of Ayurveda in various schools as well as in public places. He has developed the world’s first Ayurvedic proprietary medicine named “Raktamrut” for blood disorders. Raktamrut helps in the treatment of hemophilia, leukemia , low hemoglobin due to an unknown factor and Raktapitta. He received a number of awards for his research in Ayurvedic medicines.

Dr. Shubham is a social worker and at the age of 19, he established a voluntary organization of Young Doctor’s in order to provide selfless social services in medical field.

Dr. Shubham Ramnarayan Dhoot has been honoured for his outstanding work with National Award for Individual Excellence 2021 under the category of Shrestha Divyangjan.

The 43 year old Nagpur resident’s  Locomotor Disability of 87%  did not deter him from completing MBA (Finance) and empowering the specially abled. He started his own venture by manufacturing soap and detergent under Ranjana Group of Industries. He won National Award in the category of Best self employed Divyangjan in 2007 and for empowerment of persons with disabilities he was awarded with Maharashtra Udyog Bhushan Award in 2016. He also won Magnetic Maharashtra Award (Maharashtra State Award for Start-ups), 2018. He has been involved in organizing special training camps for self employment of Divyangjan.

Jaysingh Krushnarao Chavhan has been honoured with National Award for Individual Excellence 2022 under the category of Sarvshrestha Divyangjan for his accomplishments in the empowerment of persons with disabilities. 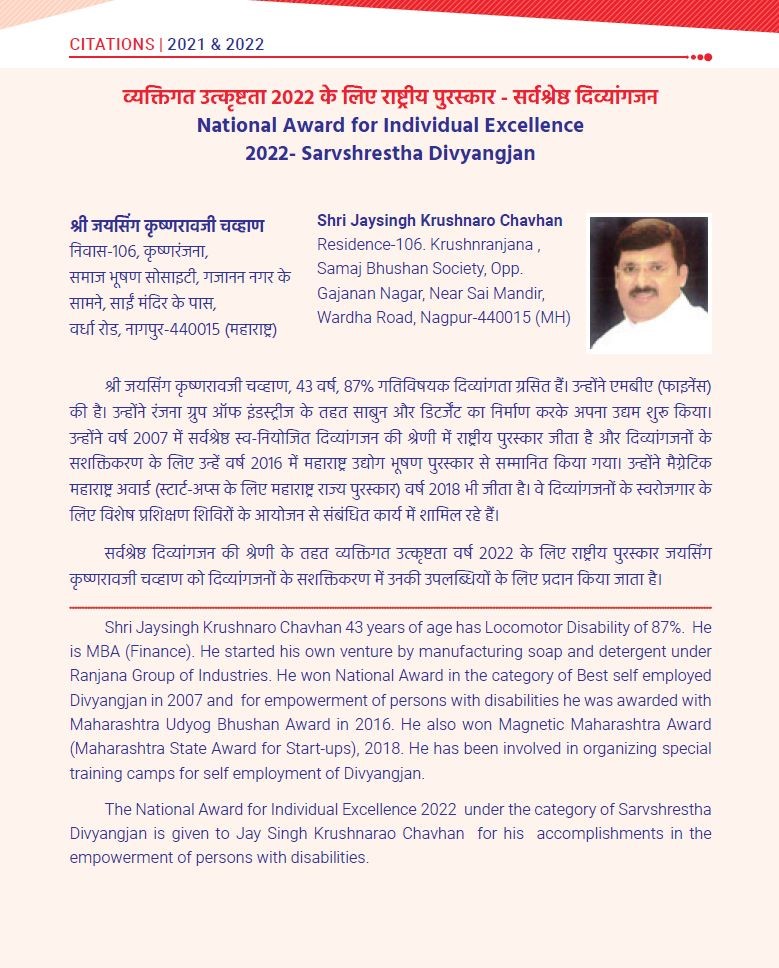 The state of Maharashtra itself has been recognized for making a contribution towards empowering the specially-abled and implementing the Accessible India programme.  The state has done access audit of a total of 180 Government buildings in four major cities of Maharashtra.Out of these 180 buildings, proposals for making 142 buildings accessible have been sent. The retrofitting work has been completed in 137 buildings. Out of funds amounting to Rs. 21.67 crore, utilization certificate for Rs. 19.30 crore has been sent to the Central Government.

Aurangabad based NGO Mahatma Gandhi Seva Sangh has also been honoured National Award 2022 for Institutes engaged in Empowering Persons with Disabilities. for providing rehabilitation to persons with disabilities.

Zilla Parishad of Akola district has also been honoured with a National Award for the year 2021 for their works done for empowerment of divyangjans. 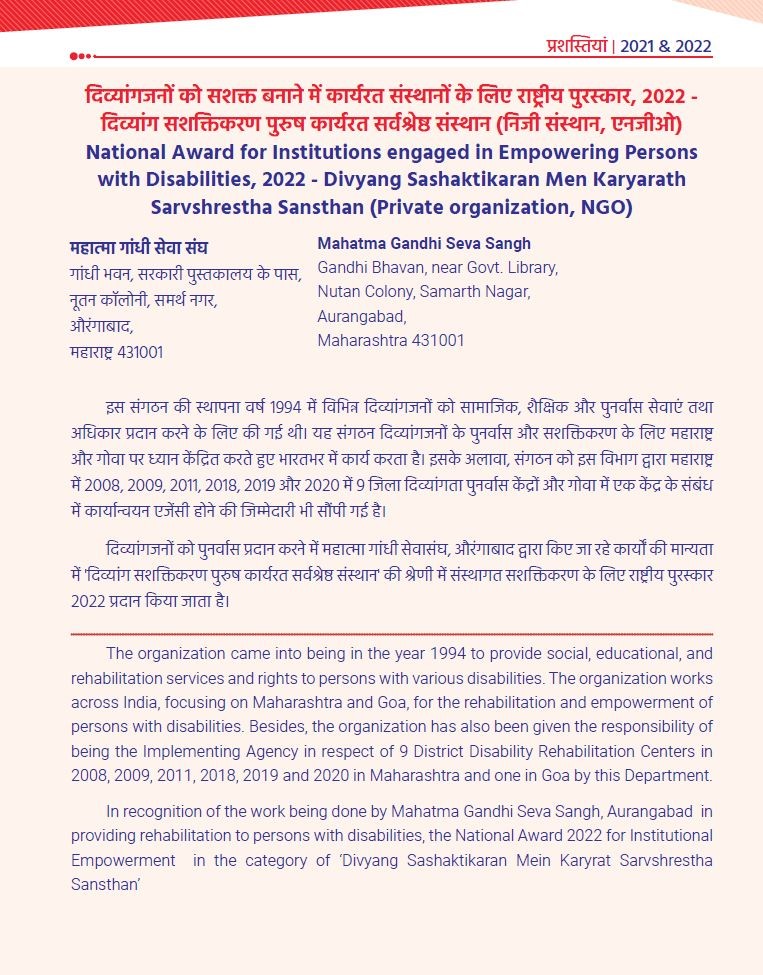 Atul Bhatt, CMD, RINL ,flags off the Vizag Steel Run-a 5K promo run as a precursor for the Vizag Marathon