New Delhi :Department of Justice, Ministry of Law and Justice, Government of India observed the International Day of Yoga (IDY) at its premises in Jaisalmer House, a heritage building, today. Shri S.K.G. Rahate, Secretary, Department of Justice along with senior officials and staff from the Department participated in the event.

The Department and Judiciary were in close interaction for smooth conduct of the International Day of Yoga, 2022 at the Supreme Court of India, all the 25 High Courts and District and Subordinate Court Complexes across the country. The event was celebrated at an unprecedented scale with the participation of over 30,000 members from the Judiciary including Hon’ble Judges of Supreme Court, Hon’ble Judges of High Courts and Judicial officers of District & Subordinate courts, Court officials & staff and members of the Bar at various court complexes. Supreme Court of India and High Courts located in iconic buildings with unique architecture added to the grandeur of the occasion. Common Yoga Protocol, awareness of benefits of various Yoga Asanas by Expert and Demonstration of Yoga, were some of the activities undertaken at the event. 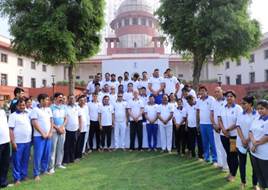 (Photos of Yoga Celebrations at Iconic buildings of some of the High Courts like Allahabad, Madras, Jharkhand & Patna among others)

The International Day of Yoga has evolved as India’s most significant public health initiative with the Government of India shaping it into a mass movement. At the initiative of the Prime Minister Shri Narendra Modi, the United Nations General Assembly took a historic decision in 2014 to declare 21st June as the International Day of Yoga (IDY). This worldwide acceptance of Yoga is a matter of pride for our country, as Yoga is an integral part of our nation’s cultural and spiritual heritage.

The theme for this year IDY 2022 is “Yoga for Humanity” as it depicts how during the peak of the COVID-19 pandemic, yoga served the humanity in alleviating the suffering. In the emerging post-COVID geo-political scenario too, Yoga has brought people together through compassion, kindness, foster a sense of unity and build resilience among people world over.