Secretary DARPG V.Srinivas congratulated Chief Secretary Government of Andhra Pradesh Dr. Jawahar Reddy on his assumption of office. He also congratulated the Government of Andhra Pradesh for the successful implementation of the Good Governance Week 2022, operationalizing the comprehensive public grievances redressal system SPANDANA, for the strong performance under the National e-Services Delivery Assessment 2021, for widespread adoption of e-Office in the State  and implementation of several award winning models of Good Governance under the Scheme for PM’s Awards for Excellence in Public Administration and the National e-Governance Awards Scheme in Andhra Pradesh.

The DARPG delegation visited the AP HRD Institute in Kaza Amaravati and met Senior Officials. The annual plan for conducting capacity building programs for Grievance Redressal Officers in Andhra Pradesh under the Sevottam scheme was discussed. From January to March 2023, 50 Sevottam modules to cover 5000 Grievance Redressal Officers would be held. From 2023-24 the Sevottam program in the State would be further expanded.

The DARPG delegation also visited the Gram Sachiavalaya at Nambur village and familiarized itself of the best practices in citizen centric governance models of Government of Andhra Pradesh.

The following roadmap for collaboration was drawn up: 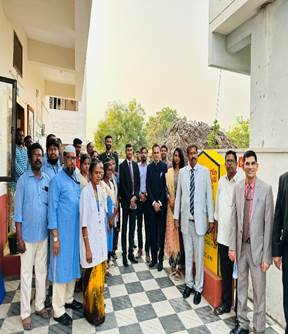 India is the front runner in mitigating climate change globally and is progressing fast on its energy transition agenda: Hardeep S. Puri at Auto Expo 2023