The brainstorming meeting started with a welcome address by Shri Hasan Jawaid Khan, Chief Scientist, CSIR-NIScPR. He expressed the gratitude towards all experts for joining this important meeting. He explained many efforts of science communication being made by CSIR-NIScPR and other organisations. He also addressed the importance of science communication in untouched languages, far flunged regions, undiscussed topics and media of communication for dissemination of science, and said still we have miles to go. 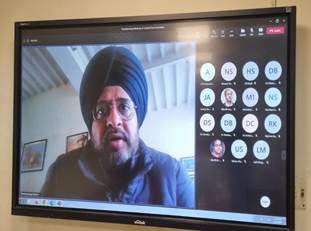 Further Dr. Manish Mohan Gore, Scientist, CSIR-NIScPR introduced the agenda and outline of the brainstorming meeting. Dr. Gore is the Principal Investigator of the project focused on science communication in the Indian languages for CSIR-NIScPR. He discussed the status, achievements, challenges and possible solutions for communicating science in respective languages. The framework for developing popular science literature in Indian languages, particularly those that have comparatively less literature was also discussed by him.

In this brainstorming meeting, experts of science communication in all the 22 Indian languages (Assamese, Bengali, Bodo, Dogri, Gujarati, Hindi, Kannada, Kashmiri, Konkani, Maithili, Malayalam, Manipuri, Marathi, Nepali, Odia, Punjabi, Sanskrit, Santali, Sindhi, Tamil, Telugu, and Urdu) were invited and they discussed and suggested plans for appreciation, promotion, and incentives for the development of science communication and popular science literature in these languages. These 22 official languages are listed in 8th schedule of the Indian constitution.