By Chitta Ranjan Pani; Bhubaneswar: India went into a total lockdown on March 25, 2020 to contain the spread of the COVID 19 pandemic. It became more than two months the lockdown to continue and for millions of workers in the country engaged in the unorganized sector including the forestry sector. For the poor and vulnerable living across the country, the sudden loss of livelihood has meant that relief and welfare programs funded through public money are their sole lifeline. The recent  cyclonic storm in the Bay of Bengal has affected a lot to the coastal areas of both Odisha and West Bengal. The worst sufferer are the  millions of tribals and other forest dwelling communities across India. Unfortunately the lock down phase has been coinciding with the MFPs Collection period. Major MFPs like Tamarind, Char Seed, Sal Seed, Tendu Leaves, Tree borne Oil Seeds, Mohua Flowers, Siali and Sal Leaves and other forest produces are collected and sold by poor section of the community to eke out a living. The prices they realize do invest for agriculture on the onset of monsoon. This collection of above mentioned forest products contribute to 40 to 60 percent of their annual income (March to June, 3-4 month’s period).

Both Kendu Leaves and Sal Seeds are the end remunerative minor forest produces before the onset of the monsoon. Tribal and other forest dwelling communities depend on these two produces mostly because it provides them a good amount of income to sustain their livelihood in the agricultural lean period and also the earning from both produces support them to invest in agriculture activities ( buying of seed, manure etc) in the monsoon period.

Kendu Leaves (Diospyros melanoxylon) as a forest produce is  of paramount importance for the tribal and weaker section of the community across India. Kendu leaf production is estimated around 350 thousand tons of leaves worth US $2000 million collected annually throughout the forest of India. Around 30-40 million people are directly employed in Kendu leaf collection and beedi making. As per All India Beedi Industry Federation, about 550 million pieces of beedis are sold every year in India by (about 10 million people mainly as a cottage industry). Around 4.4 million people are registered as bidi rollers in the country.

Monopoly of Odisha in the Kendu Leaves market due to its high quality and processing of leaves:

Odisha is the third largest producer of kendu leaf next to Madhya Pradesh and Chhattisgarh. The annual production of Bidi Leaf in Odisha is around 4.5 to 5 lakhs quintal, which is about 20% of the countries annual production. Kendu leaf is available in 50 Sub Division of all the 30 districts. The kendu leaf of the Balangir District is traded as the best kendu leaf throughout India. The Uniqueness of Odisha’s Tendu (kendu) leaf is in processed form where as the rest of the states in India produces in Phal Form.  But the following Districts cover maximum Kendu leaf growing areas. The districts are Sundergarh, Anugul, Deogarh, Kalahandi, keonjhar, Kalahandi, Kandhamal, Malkanagri, Nabarangpur, Koraput, Dhenkanal, Jharsuguda, Sambalpur, Baragarh, Bolangir, Sonepur, Boudh and Nuapada.

Target Vs Progress during the Covid 19 Lockdown Phase:

The Odisha Government has planned to procure 3 lakh quintal kendu leaves by the end of May 2020. The process will continue till May and the government has allocated 170 crore as wages for at least 6 lakh registered kendu leaf pluckers. The government has also sanctioned the funds to be paid as wages to the workers. Around 2 lakh people have been involved for bush cutting exercise and paid 26 crore as wages, as per the statement from Secretary, Forest & Environment Department, Government of Odisha on dated 1st May 2020.

The ground realities on Kendu Leaves procurement by the state have gave altogether a different picture. In most of the Kendu Leaves division, the plucking started in the last week of April and after 2-3 days of collection, the collection was stopped in the Kendu leaves Phadis due to untimely rain and hail storm. In Kendu Leaves division like Nuapara, Kandhamal, Sambalpur, Deogarh, Sundergarh the collection started in Mid May. Due to delay of procurement,reduction in number of days, the target to achieve 3 lakh quintal kendu leaves during lockdown phase seems impossible.  There have been odd and even measures adopted ( to prevent spread of Corona) in few Kendu Leaves division like Jeypur, Kalahandi  for collection of kendu leaves that restricted limited Kendu Leaves pluckers to come to the Phadi for selling of leaves. There are instances of denying issue of Kendu Leaves Card to new entrants with a fear of more assembly in the kendu leaves phadi. The Kendu Leaves Pluckers are  of the opine that as there was delay in  collection of Kendu Leaves in  Phadi and subsequent reduction in collection days, the department might not go for further collection of leaves with an excuse that, the leaves were over matured and hence not suitable for bidi making. Denial of Kendu leaves card, reduction of days for collection ultimately affecting the livelihood of the millions of tribal people during the lockdown period who were expecting a fair income when they forced to sell Mohua flowers , Tamarind, Myrabolans in  throw away price due to limited procurement by the State marketing agency under MSP for MFP Scheme. The department has also been instructed to pay the wages to the Kendu Leaves Pluckers account on weekly basis, but that also not reached to the pluckers account in right time. 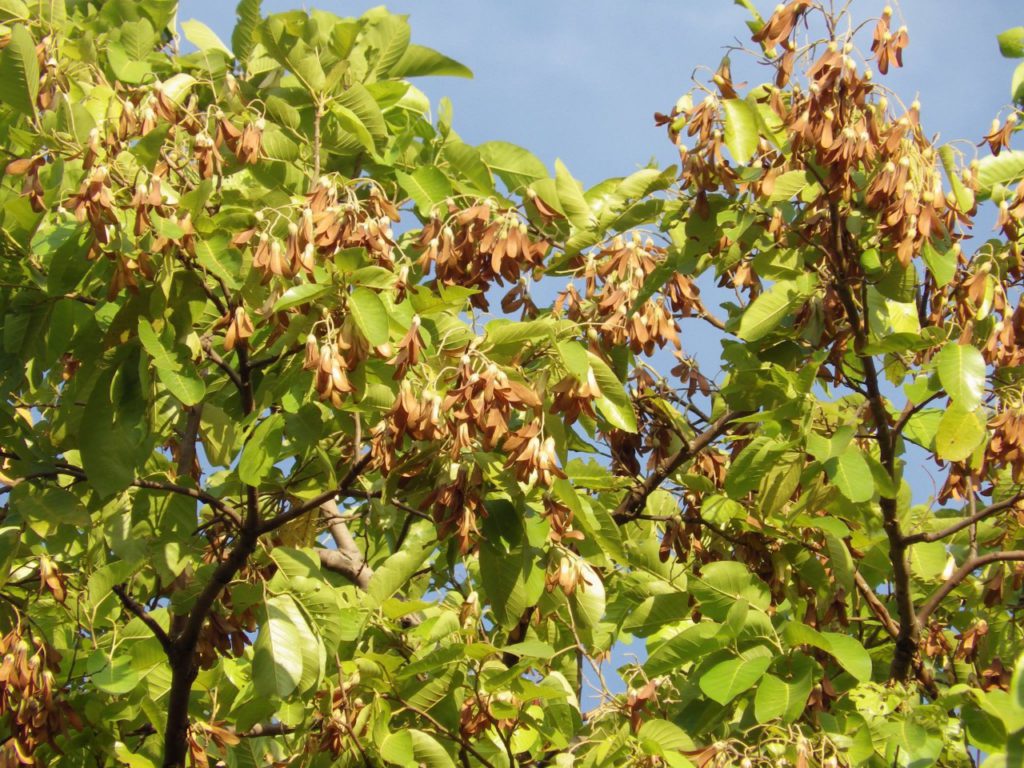 Similar situations also with the Sal Seed (Shorea Robusta) which Minimum Support Price has been fixed Rs 20/- per KG. Already the collection of Sal Seed has been started and there is no buyers ready to offer the declared MSP to the Sal Seed gatherers. It has been reported from Deogarh, Sambalpur, Mayurbhanja, Raygada, Koraput, Kalahandi that traders are not willing to pay more than Rs 10/- per kg which is fifty percent less as compared to the MSP.  The recent oceanic storm “AMPHAN” has also severely affected the Sal Seed Procurement. Due to high wind speed, almost all Sal Seeds were fallen on the ground. All the Sal Seed gatherers are now devoted themselves for collection of Sal Seed with a hope that they would sell and meet their basic needs during this pandemic Covid 19 time. One adult can collect 100 kg of seeds (fresh weight) in a day, but the process of drying, roasting, winnowing and pounding to remove husk and separate kernel sections takes two people and two days. This takes the total number of man-days to five for every 100 kg (dry weight).” But they are disheartened when they are being offered very low prices by middlemen/ Kutchias. Absence of buyers and indifference of government has created a big vacuum in the Sal Seed trade and,   have left to the market to determine its price and the fate of collectors, who are no more the responsibility of the State. 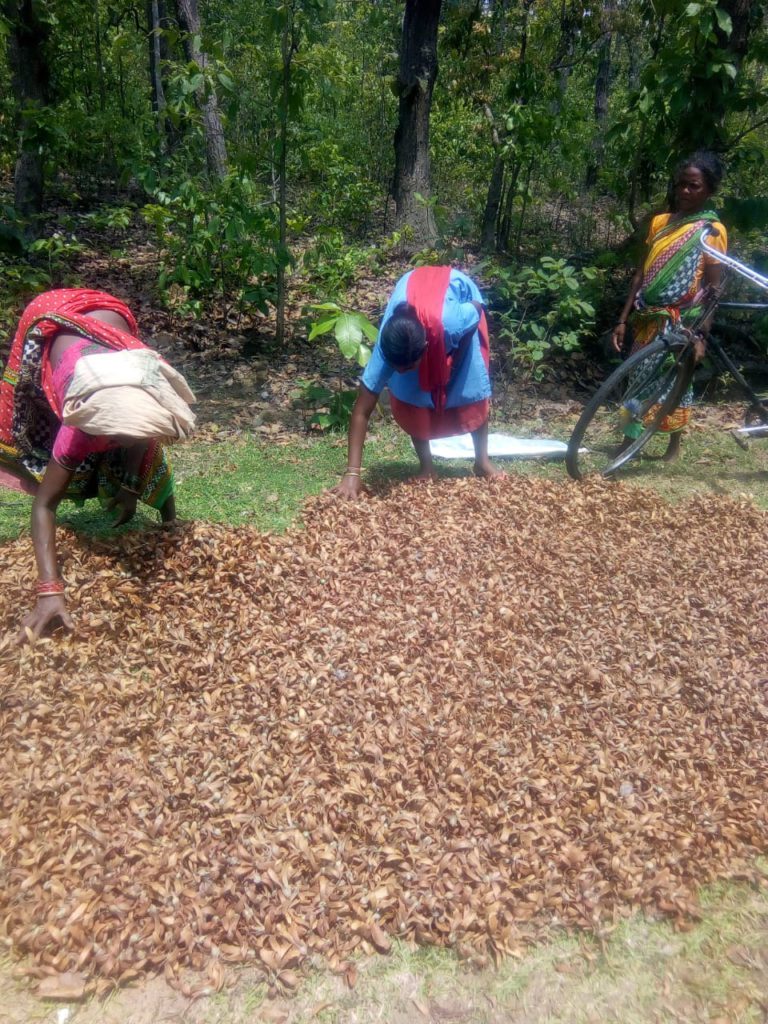 Sal Seed has a lot of Potential to cater the livelihood of Tribal:

Sal Seed plays a crucial role in the economies of the Central Indian States of Jharkhand, Bihar, Orissa, Chattisgarh, and Madhya Pradesh. About 90, 000 forest fringe villages with a combined population of 56 million (FSI) are dependent on Sal seed as an important livelihood resource. In all these states, Sal seed collection provides employment for more than 80 days a year. About 11 million forest dwellers, most of them tribals, in this part of the country eke out a living from Sal seed.

Odisha has a rich depository of Sal seeds accounting for 25% of production in the country. For primary collectors Sal seed selling has been an important source of earning both amount-wise and time-wise as seeds are sold in agricultural lean seasons of May & June. Orissa is rich in Sal forest and Sal trees are seen in most parts of the state except the coastal belt.

In recent years, the collection of Sal seed was declined due to not collection by the state marketing corporations. The recent trend of collection of Sal Seed under the MSP Scheme from the year 2014 to 2019 by the Odisha Government reveals that hardly there is any importance of Sal Seed in the life and livelihood of tribal and other forest dependent communities. One of the reason attributed to it having not Solvent Extraction Plants (all Solvent Extraction Plants were closed over the period of time) in Odisha. Again with a fear of incurred loss in the trade of Sal Seed ( the State has to bear the losses of 25 percent if any in a  proportionate of 75:25 ratio, Center has  to bear 75 percent, under the Minimum Support Price Scheme for Minor Forest Produces), the State Procurement Agency always remained in back foot.

Interestingly, to hide the own failure, the legitimate right of the Sal Seed gatherers to get fair price somehow curtailed and try to build a narrative that since there is not much demand for Sal seeds, the state marketing corporations should not be intervened to procure Sal seeds from tribals as the state government may not be in a position to pay for them. It seems that the state government believes that investments in promoting tribal livelihoods are a liability.

The potential availability of Sal Seed in India has been estimated to be of the tune of 1.5 million tonnes. The potential of Sal fat availability is around 0.18 million tonnes. However, only 6,000 to 9,000 tons of Sal fat is being produced annually in India. One of the reasons for low production of Sal fat is a result of the procurement policies of states, which has led to stagnating collection prices, forcing traditional Sal seed collectors to opt for other. As said earlier, Sal seed not only takes care of the livelihood of millions of forest dwellers in Central India; it also guarantees employment for several millions more in the processing and end-use industries, besides looking after the foreign exchange needs and entrepreneurial development in the country.

State Preparedness to tackle the gravity of situation:

Amidst the lockdown, though substantial delay, Tribal Development Cooperative Corporation of Odisha Limited (TDCCOL), the State Procurement Agencies has came forward to procure MFPs like Tamarind and Myrabolans directly from the MFP Gatherers in few districts like Malkangiri, Sambalpur, Kalahandi. It is reported that TDCCOL has already procured Tamarind worth close to Rupees One Crore under the MSP for MFP Schemes. It is reported that TDCCOL has given a target to procure Sal Seed worth of Rupees five Crores under MSP Scheme during lockdown phase. District administrations are also instructed to procure Sal Seed through the Van Dhan Kendra under the Pradhan Mantri Van Dhan Karyakrama. TDCCOL has undertaken a massive campaign to sensitize the MFP Gatherers on the MSP for Minor Forest Produces in collaboration with ITDA of Tribal dominated districts. The sensitization process has already started in few districts like Rayagada, Sambalpur, Keonjhar, Mayurbhana and planning to cover more districts soon.

As Covid 19 has posed a significant threat to the tribal and forest dwelling communities, Government need special attention for procurement of Sal Seed and Kendu Leaves, not in a sporadic way but with a well thought design to procure from all parts of the state. The state should made efforts  to link product development research with trade and  must also focus on low cost, replicable and appropriate technology that can be used for value addition at the local level for uses like soap making, cattle feed etc.