‘Civil servants must learn to work with anonymity and dedication’: Vice President to IAS Officers

New Delhi : The Vice President, Shri Jagdeep Dhankhar today called upon IAS Officers to work with dedication for improvement in delivery of services and grievance redressal to citizens, while maintaining the principle of anonymity.

175 IAS officers of the 2020 batch posted as Assistant Secretaries in various Ministries called on the Vice President, Shri Jagdeep Dhankhar at Upa-Rashtrapati Nivas, along with Smt. S. Radha Chauhan, Secretary, Department of Personnel & Training (DoPT) and other senior officials from DoPT.

Addressing the officers, Shri Dhankhar said that as civil servants, “you owe your highest allegiance to the Constitution and must always strive to preserve and uphold the rights guaranteed under it. Attracting attention to oneself or taking political positions must be avoided at all costs”. The Vice President advised the officers to remember that “today’s citizen aspires to have a voice in the processes of policy formulation and implementation”. He suggested that a civil servant’s empathetic attitude towards the common citizen determines their satisfaction from Government services. He called upon the officers to become “role models in this ‘Attitude-changing Mission’ of the government.”

The Vice President also noted with pleasure that the batch comprised a significant number of women IAS officers and noted that “it is an encouraging development that women are now leading in all fields, including administration and governance”. He conveyed his best wishes to the batch of 2020 in their endeavours. 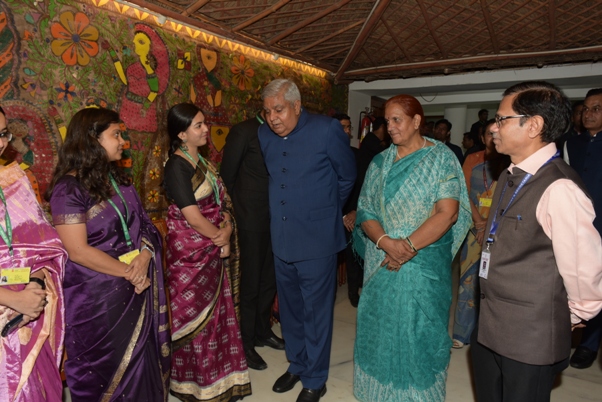 The Vice President, Shri Jagdeep Dhankhar, in an interaction with the IAS Officers of 2020 batch at Upa Rashtrapati Nivas today.