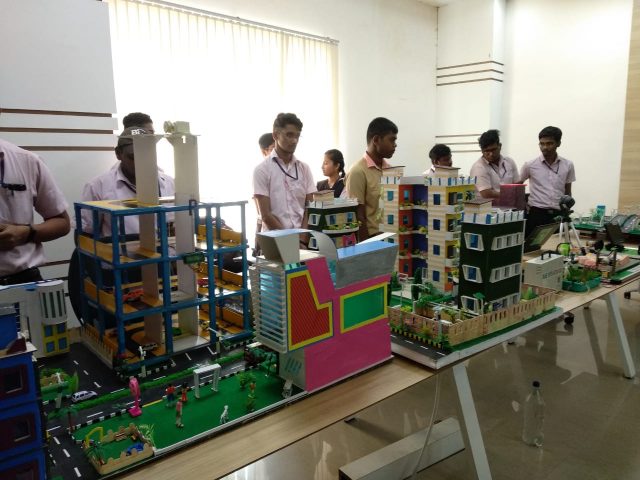 Bhubaneswar: Worried of standing in long queue in a shopping mall! Yes, all of us must have faced this thing as while shopping time is even less the billing time often exceeds considerable time putting elders and parents with little kids in great distress. But a group of students from Silicon Institute of Technology (SIT), Bhubaneswar, has an answer to this ordeal.
Suchismita Sahu, Anurag Mohanty, Asutosh Senapati and Achieve Pattanaik of SIT in their proposal “Smart billing trolley’’ or “Smart Cart’’ today at the City Changer Lab presented that through RFID tagging and use of information technology (IT) tools shoppers can make their items scanned in the trolley itself so that it would lessen the waiting time considerably in the billing areas. If the customer can take its mobile option then even he/she can pay online and with the same RFID check at the exit go out of the mall.

Speaking about their projects the students of SIT also added that with a lots of suggestions and pruning the model can also take ideas like auto debit facility we come across in Metro Railway stations so that customers could have easy purchase, billing and exit and under the surveillance as the “Smart Cart’’ will be equipped with RFID sensors.

Another interesting SIT project was “Biometric EVM’’ in which the team presented a finger print enabled electronic voting machine which could address multiple issues of EVM complaints like tampering, multiple votes with fingerprint as an ID. It could also help a voter to caste the vote anywhere in future but keep the identity intact as fingerprint of a person is unique and person specific.

These two were not the only projects at the two-day City Changer Lab event at the Bhuabaneswar Smart City Limited’s (BSCL) office, but 19 other interesting ideas by college students and various institutions came for discussion and presentation as this year it was the third edition of City Changer Lab happened under the Socially Smart Project jointly undertaken by BSCL, Bhubaneswar Municipal Corporation and United Nations Population Fund (UNFPA).

The 20 projects included four from College of Engineering and Technology (CET), four from Central Tool room Training Centre (CTTC), three from SIT, three from Government ITI Bhubaneswar, two from KIIT University, one each from DAV School of Business Management, Astha School of Management, SOA School of Pharmaceutical Sciences and Trident Academy of Technology respectively.
Bibhu Padarbinda Mohanty, Bijaya Acharya and Prabhudatta Pujapanda of CET, Bhubaneswar presented the concept of Smart Solar Grid in which there will be optimized use of space of a rooftop as in the conventional use only a particular size and specification of solar panel is used to generate energy.
Bibhu Padarbinda, second year MTech student in Electrical System Engineering and the team leader of the proposal, said “we have also proposed a nationalized dashboard for monitoring of electricity from rooftop solar panels so that all power generation from rooftop solar panels could be monitored locally, state-wise and national basis.’’
Abhijit Sahani and Ahwaan Nayak of CET through their proposal “Waste to Best’’ presented an interesting project on plastic roads and plastic paver blocks which could end the woes associated with single use and other daily use plastic as the plastic menace has affected animal life, health, climate and economy to a great extent both in urban and rural areas.
The interesting projects from these institutions included proposals on plastic and solid waste management, new ideas in solar power harvesting and management, urban agriculture using expired medicines as inputs for plants, drones carrying first aid medicines to reach accident sites, smart and cost effective parking system, earthquake resilient structures, ATM protection system and capturing carbon dioxide from commercial complexes and using the captured carbon dioxide for industries using it.
Sonali Mandal and Ajit Mishra from School of Pharmaceutical Sciences, SOA University spoke about their project in which they proposed to use expired medicines in order to use them as nutrients for urban farming and increasing soil fertility. Students of Government ITI Bhubaneswar from their other projects also spoke about affordable robotics surgery.
Among the jury members independent solid waste management consultant Narsingh Panigrahy, AGM OPTCL Prashant Patnaik, DGM OPTCL Niladri Khadanga, BMC Deputy Commissioner (Sanitation) Subhandu Sahu, BSCL General Managers (Administration) Diptirani Sahoo, GM (Engineering) Ashwini Kumar Biswal and GM (Technology) Seshadeb Panda were present.
It is learnt that BSCL, after scrutiny of these projects, would recommend the promising ones to MSME Department and other agencies promoting start-ups and entrepreneurship.

Total #Coronavirus positive cases rise to 1834 in India; 437 cases in the last 24 hours