New Delhi: India has been witnessing a rise in the active caseload over the past few days. India’s total Active Caseload is pegged at 1,45,634 today. It now consists of 1.32% of India’s total Positive Cases.

More than 74% of the Active Cases of the country are in Kerala and Maharashtra. Of late it is seen that there has been a spike in the daily cases in Chhattisgarh and Madhya Pradesh also. Punjab and J&K too are witnessing a surge in daily new cases. In the last four weeks in Kerala, the average weekly cases have fluctuated between a high of 42,000 to a low of 34,800. Similarly, in the last four weeks, the weekly positivity in Kerala has ranged from 13.9% to 8.9%. In Kerala, the district of Alappuzha is a cause of special concern where the weekly Positivity Rate has increased to 10.7% and weekly cases have increased to 2,833.

5 States/UTs have weekly Positivity Rate more than the National Average. The National average is 1.79%. Maharashtra has highest weekly positivity rate with 8.10%. The Centre has advised all these States to work on five major areas. These are:

On the front of COVID Vaccination, India’s cumulative Vaccination Coverage has crossed 1.10 Cr.

The 2nd dose of COVID19 vaccination started on 13th February, 2021 for those beneficiaries who have completed 28 days after receipt of the 1st dose. Vaccination of the FLWs started on 2nd Feb 2021. 81.65% of the new recovered cases are observed to be concentrated in 5 States.

Kerala has reported the maximum number of single day recoveries with 5,841 newly recovered cases. 2,567 people recovered in Maharashtra in the past 24 hours followed by 459 in Tamil Nadu. 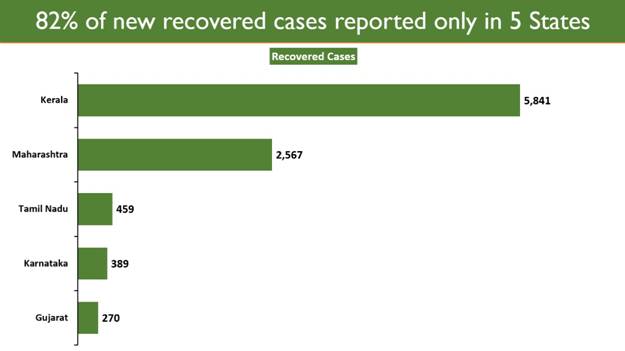 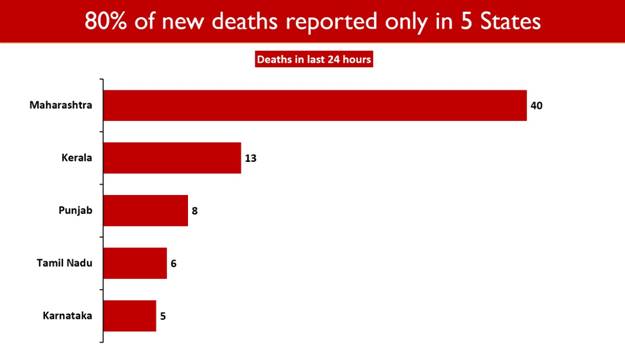