The LWE situation in Rayagada, Koraput, Nabrangpur and Malkangiri districts was reviewed today. The presence of red rebels mainly in Malkangiri district was an area of concern. It needed coordinated endeavour on part of BSF, police and civil administration to curb the red terror in the area, said Vikash Chandra Inspector General (operation), BSF Headquarters, New Delhi. 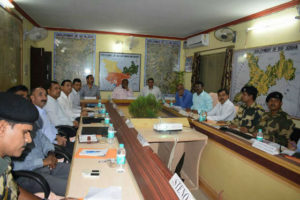 A review meeting on BSF deployment, operations and related issues were conducted by Vikash Chandra, IG Operation of BSF Headquarters , New Delhi at DIG Headquarters ,BSF Koraput today. After the meeting Mr.Vikash Chandra along with senior officers visited COBs like Podhapadar under Narayanpatna Police limits. He interacted with commanders and troops there and encouraged them to put their best in combating naxalism.

The visiting officers also interacted with media and briefed about good job done by BSF in Odisha. Whereever BSF is deployed maoists have retracted to interior areas and was able to win confidence of public , he added while highlighting developmental activities in interior areas that was carried out in presence of BSF personnel .

The IG Operation, BSF emphasized that operations will be intensified in coordination with state Police . Narayanpatna had become a peaceful area due to contineous efforts of BSF and Ditrict Police . BSF contribution was well recognised at every level. He stressed to add human value to the ongoing operations and to win heart of public , he added