Gopalpur: The annual festival celebrating the art, culture, and history of Ganjam, Public Arts in Gopalpur [PAGo] 2018 kicked off on 14-04-18 at Gopalpur-on-Sea. The Event is organized by Brahmapur Development Authority with a motive to stimulate investments in the hospitality sector to this region and also to promote the art & cultural tourism.

Hundreds of cyclists and skaters took part in the Cyclathon conveying the message of PAGo from Berhampur Stadium to Gopalpur Beach. Various community engagement initiatives were attractions on the beachfront like Art Bazaar, Clay Modelling, and wall painting. The theme for this year’s PAGo was ‘Magnifying Maritime’. Various Murals and Installations namely The Storm of Kalinga Sagar portraying the effects of previous Cyclones at Gopalpur and the resilience of the community, variety of fish sculptures like Safe fish- made of terracotta tiles: 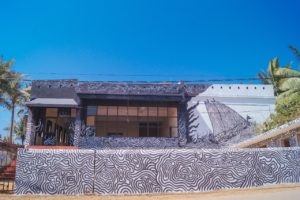 the ones who escapes from their prey, She Fish: empowering the womanhood within the species & Angry Fish: the one anguished at the eutrophication in the beach. The oldest hotel façade was entirely transformed up with a graffiti of a huge Octopus, A huge Basket full of Golden Hilsa fish was one another attraction at the beach. The
steps of the main beach platform spanning 500m were colored with aquatic life imageries. The art forms helped the beach town have a rejuvenated look which was widely appreciated by the tourists, beach
revelers and followers of the event in the social media. Kids relieving in summer vacations spend a great time coloring the walls of the area with comics of aquatic flora and fauna.

The District Collector Sri. Prem Chandra Choudhary along with Dr. Ramesh Chandra Chyoupatnaik, MLA Brahmapur declared the event open to the gathering. Though the rains and some technical stage glitches delayed the cultural programmes on the initial day, huge footfalls were observed and on Sunday the program witnessed a grand gathering at the beach to witness the art fest. Performance Arts from Ganjam like Kandhei Nacha, Pashumukha Dance, Jodi Shankar, Rannappa and Prahallad Natak were presented before the audience. A Retro Odia Night as a
tribute to musical legend Akshaya Mohanty and Bollywood Night led by Sashank Sekhar happened on both days respectively. Last year PAGo had gained wide popularity making it fetch into the Odisha tourism
Calendar.