Understanding the equation and algorithm of life

“ Any hole in man’s character drags him astray!”

Like any other book of poetry, ‘Come down Please’ will take you on a trip to different emotions, some of which will soothe you, while some, will leave you uncomfortable. The subject line remains constant throughout the collection. Religion, environment, climate, change, Earth, nature, shift from rural to urban life, life and death, peace and love,  and culture remain the centre of his poems. In the first half of the poem Satyanarayan Mishra doesn’t maintain a rhyming scheme but the second half of the book will surprise you. As a reader, you will witness a drastic change in his pattern and style of writing. 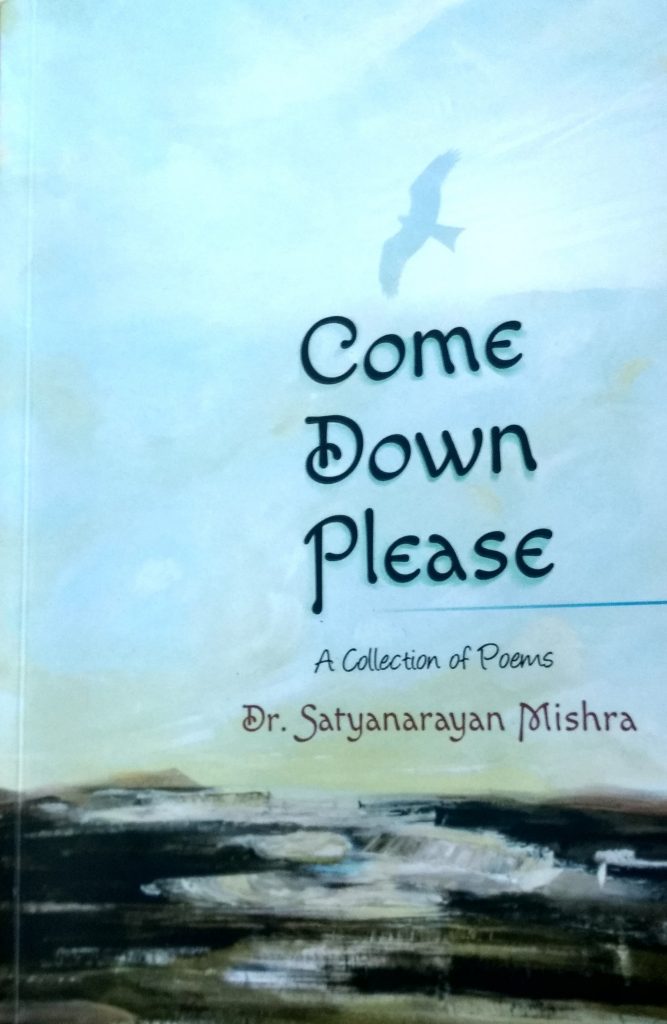 Dr. Satyanarayan Mishra, Doctorate in Management from Utkal University has put his words to a good use. In the opening poem, which also gives name to the book, Come Down Please, the poet is seen making a request to the Deity, who is highly worshipped in Odisha, to come down on Earth and spread her light. He wishes and prays of love and peace. This also shows what an important thing is missing from our life – peace. We are moving forward but peace and love is what we still are longing for. We are missing the goodness that once was all in our heart. The feeling of getting lost and wanting to come back is realistically depicted in the poem. He has used the culture and religion of the place to his advantage in propagating the message he wants to convey to the people. Peace and love remain the focal point in many of his poems throughout the collection.

With poems like ‘Moon’,’ My village’, he not only gets nostalgic but also compares the shift in lifestyle and culture, the movement from villages to cities and the fear that follows with it. In a similar way, he has paid tribute to his land, Odisha, its culture and geography, to the heritage and art it has in short. But at the same time his words also acts as a slap because in his opinion we the generation as a whole has wasted the gift we were given. He is afraid of not giving a worthwhile history to the present and coming generation who can take inspiration from it just like he did from the history he was gifted by his forefathers. The modern day problems like extensive urbanization, deforestation etc frightens him to core.

Talking about the language, it is simple and easy to understand, just some fancy words here and there if you are a non-regular English speaker. It may seem as if the poems are written for English Literature students at first, but, as it proceeds, it gets simpler and relatable.  As mentioned above, it is mostly a blank verse in the first half while specific rhyming scheme has been followed in the other. To be honest, the second part really surprised me and also got me more interested and connected as a reader.  The poems sound sad but are representatives of a hopeful tomorrow.

Dr. Mishra is a sarcastic poet. He intends to convey  just one message, which is simpler and clearer, but two reaches the reader, the deeper one more sharply, like in ‘A Tribute to Himalaya’, which can also be perceived as a Tribute to Mother India. It feels like he wants to force you to think ahead and beyond just the written words.

“What is thou, mother?

Horror or calm, cruel or sympathetic…”

Throughout the collection, it feels like the poet is trying to better understand the equation and algorithm of life through his poem. He also slams the hypocrisies of life, like he did in Vice and Virtue. He slams the rituals and practices of the society that are empty and hollow from inside. This poem is definitely one of my favourite from the collection. A must read.

Similarly, he has also tried to change the way we perceive things in life. In ‘Once Think for Them’, he talks about the farmers and soldiers and how they have sacrificed their comfort for a comfortable life of ours.  We may have become a civilized society as a whole, but the core of it still has a long way to go. And through poems like ‘Confession’, ‘your win is my win’, ‘song of the little flower’, he has finally touched the human relationship, which can be with oneself or with a partner or a child. He further stresses on the art of letting go in order to grow.

The poems are hopeful, and propagate the message of love, peace and knowledge. It is introspective, interrogative and thought provocative in nature. Alliteration, metaphor and hyperbole are often used to express in a better way. The poet is a curious child with a plenty of questions. He is also a man with serious questions which is left to the society to ponder upon. It reflects the truth and reality of life. The best thing about it is that Dr Mishra has raised topics that need be spoken about and have the basic lessons of life to offer. This collection of 27 poems with social message is highly recommended and deserves a read at least once.

Rupa Kumari is a student of PGDJ (English) at IIMC, Dhenkanal, Odisha.

Indian women to face USA, men up against Russia in Olympic qualifiers at Kalinga Stadium Bhubaneswar