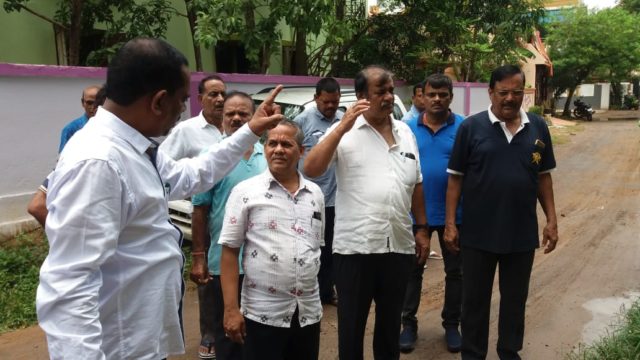 Bhubaneswar: In a bid to remove all encroachments and dumping of garbage as well as C&D waste on roads and drains in the city, BMC Zonal teams as well as the joint enforcement squad of Bhubaneswar Municipal Corporation and Bhubaneswar Development Authority undertook extensive eviction and demolition drive across the city.

In line with the instructions from the Commissioner, BMC, issued after his visit to various parts of the city on Monday, BMC Zonal squad of South West Zone demolished a fast-food shop ‘Mughlai Zaika’ which had encroached on the drain at Soubhagya Nagar square.

Similarly, notice was served on Zings Spice World in Soubhagya Nagar for penalty of Rs 25,000/- for dumping debris. As the shop was closed today, the house owner has been instructed to pay the amount. All signage of the store put up on the road has also been removed. Further action is being planned to seize the transformer and generator set which have been put up on the road with the help of electrical division of BMC. The BMC zonal squad also made the public announcement for demolition of temple blocking the drain passage near Krishna Garden. The temple will be demolished after removal of 11 KV electric pole located inside it.

The Zonal Dy Commissioner of South West Zone also submitted a report to BMC for issuing of show cause notice to DAV School in Unit 8 for dumping C & D debris on the road. It may be noted that construction materials including 4 trip chips and 1 trip sand dumped on the road was seized from this location and brought to BMC SW zone office for auction.

In similar drives by enforcement squads of BDA, encroachments have been removed over Plot 234 of OWSSB in Bahadalpur mouza in the presence of project engineer, OWSSB. The team also visited Chakeisihani area and warned to remove the encroachments over the road approach to the bridge over Daya West Canal within three days.

In several low lying areaas of the city, BMC along with Fire Services Dept. engaged 9 pumps, one excavator and one cesspool to dewater the areas.

It may be noted that joint enforcement squad of BMC and BDA, on Monday, removed encroachments over drains and footpaths near City Women’s College, Nuagaon Chowk near SUM Hospital. During eviction near City Women’s College Square and onwards, 23 Tin extension sheds, 7 Bamboo polythene sheds, 5 Cabins, 2 Fast-food shops and 4 Advertising boards were demolished in supervision of EO-II of BDA. Besides, the South West Zone squad of BMC seized 4 trips (Tipper) chips and one trip sand dumped on road near DAV school area in Ward 46.