New Delhi: A delegation of the BJP led by party national spokesperson Sambit Patra on Thursday called on the Election Commission of India in New Delhi demanding disqualification of Naveen Patnaik as an MLA for allegedly filing a false poll affidavit.

The delegation also consisting BJP Hinjili candidate Debendra Mohapatra and MLA Rabi Nayak submitted documents to substantiate their claims. Patra told reporters, “Naveen has filed a false poll affidavit and lied to people as well as the Election Commission as his poll affidavit shows Rs 13 lakh has been transferred to his bank account through RTGS. However, the statement of expenditure mentioned in the party’s affidavit says Naveen did not get funds through RTGS. 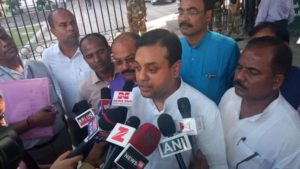 Instead, Rs 16.48 lakh was transferred through bank cheque to Naveen’s account.” Patra added that filing false affidavit is interpreted as a crime and, therefore, the party delegation demanded disqualification of Patnaik as a MLA.