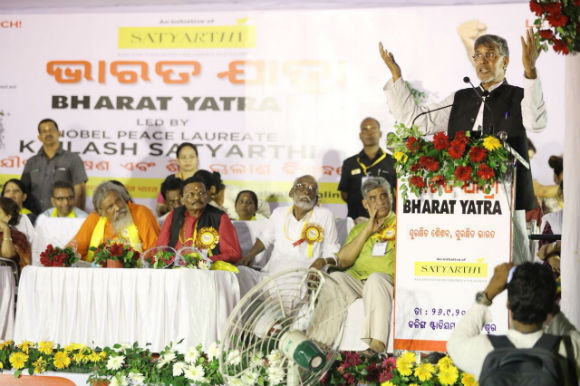 Addressing the youth and marchers, Mr. Satyarthi emphasised on the need to break the silence that pervades our society and speak out against the growing menace of child trafficking and sexual abuse. The Nobel Peace Laureate said, “Reports state that 53% people are sexually abused as children. Yet we do not speak out, we live in the silence of fear and embolden perpetrators to commit more heinous crimes. Today, as the people of Bhubaneshwar have marched for the safety of children, on the streets with slogans and banners, we have silenced the perpetrator. We will no longer live in fear and we will ensure that children are safe and free to be children, in India. I will not rest till we stop this growing menace”

The march saw the participation of nearly 5000 youth, and working professionals march fromJantaMaidan to Kalinga Stadium and demand necessary rights for the youngest citizens of our country. The spirit showed by the city of Bhubaneshwar, to pledge and join the Bharat Yatra to make India safe for our children is what is needed for the country to take its steps towards combating this growing menace.

“Today, honourable ministers are here, they are supporting the Yatra, which makes me happy and this gives me courage to move forward. I appeal to all corporate, religious leaders to spread the message that perpetrators be shamed and socially boycotted, while the victims of these traumatic events, be taken care of,” added Mr. Satyarthi.

The Bharat Yatra launched on 11 September at Kanyakumari by Mr Satyarthi is marching across the country to build unprecedented awareness on combating child sexual abuse and trafficking.
The Yatra marchers called upon the youth of the country to step up and fight for children across India. They urged people of Bhubaneshwar and the state of Odisha to strive towards building a safe childhood and a safe India.

Shri. PrafullaSamal, said “I congratulate and Welcome Kailash Ji and I assure you that the Yatra which you started – Surakshit Bachapan-Surakshit Bharat has all our support. We promise to stop this abuse against children and the state of Odisha is striving to ensure that the perpetrators who commit these crimes of violence against children are duly punished”

Ever since its launch, Bharat Yatra has been drawing enormous support from citizens across India, including celebrities like Amitabh Bachchan who tweeted to his fans to support the Yatra.
People cutting across faith, geography, profession and vocation are coming together to support the Yatra and the creation of a safe India for our children. They are collectively striving for better laws, stronger implementation and faster modes of redressal for victims of abuse and trafficking.Earlier today, Shri. Rajnath Singh, Union Home Minster assured the Nobel Peace Laureate that the anti-trafficking bill he is fighting for will get parliamentary approvals.

Earlier, Prime Minister Narendra Modi had sent a personal letter to Kailash Satyarthi extending his support to the Yatra, which will cover 11000 kilometres across 22 States, including Tamil Nadu. Some of the key cities it covers include Chennai, Bangalore, Hyderabad, Mumbai, Guwahati, Bhopal, Jaipur, Srinagar among others.

At Kanniyakumari during the flag off Mr Satyarthi had declared, “I will not rest till children of this country are not safe. I am not going to stop fighting if the raping and abuse do not stop. I cannot sleep in peace until we win our war against rape and abuse. This moral epidemic haunts our nation, and it is time we fight against it, together.”

Re-iterating his mission behind launching the Bharat Yatra, he said “Why am I marching? Because my children are being raped. I refuse to accept that eight children go missing and two are raped every hour. Each time if a single child is in danger, India is in danger. Bharat Yatra is to make India safe again for our children.”

Kailash Satyarthi has been campaigning for the freedom, safety and security for children across the globe for the past 36 years. His Nobel Peace Prize (2014) was for his continuous efforts and struggle for the rights children.

The Yatra is the launch of the three-year campaign against child rape and child sexual abuse which is aimed at increasing awareness and reporting of the cases, strengthening intuitional response including medical health and compensations, ensuring protection for victims and witnesses during trials and increasing convictions of child sexual abuse in a time bound manner.