‘Bhammariyo’ All Set To Double Up Navratri Celebrations

The Navratri vibe feels incomplete without a celebratory song, and this time ‘Bhammariyo’ has served the purpose. Composed and sung by Divya Kumar and Shruti Pathak, the song is beautifully penned by Priya Saraiya. The video also features Shruti and Divya in it.

Talking about the song, Shruti says, “I wanted to create a Navratri song this year as I couldn’t do one in 2020. It just happened one fine day that Priya and I were conversing over coffee about a Navratri song to make and she mentioned about Divya’s composition. That’s how the process began and ‘Bhammariyo’ happened. Everything was so last minute and I am glad that the whole team and TM music pulled it off.” 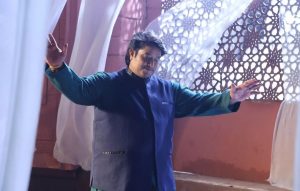 Divya has given many hits and chartbusters. However, ‘Bhammariyo’ plays the debut composition of Divya. He says, “Composition was meant to happen in my musical journey. I am happy that it happened with ‘Bhammariyo’. Though initially I wasn’t confident about it, but eventually after acquiring knowledge about it I believed that I should give in now. I had it in genes, then I challenged myself by taking the first step. Unless you take the first step you would never know what you are capable of.

‘Bhammariyo’ is a blend of classy and massy elements. Its a celebratory song with a lingual mix of Gujarati folk and Hindi. That gives it a wider approach. Moreover, its not only meant for Navratri. This song serves to multiple purposes.”

Divya Kumar comes from a musical family. His grandfather, Pandit Shivram, was a composer for many regional films in India, and for V. Shantaram’s films. His father, Bhagwan Shivram, is a musician and has recorded with RD Burman, Jatin-Lalit and Himesh Reshamiya.

He started singing since the age of eight, and even as a child he performed on stage shows. He considered other professions, but his mother urged him to pursue a career as a singer. He appeared in many shows while in Kalyanji Anandji’s troupe, and has worked with leading playback singers like Sunidhi Chauhan, Shreya Ghoshal, and Javed Ali, all from Kalyanji Anandji School of Music. He participated in the 50th Independence day special episode of Sa Re Ga Ma in 1997. 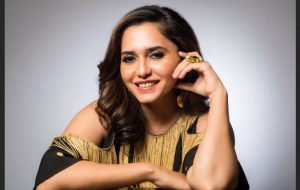 Lyrics hold the core essence of a song. In ‘Bhammariyo’, singer/lyricist Priya Saraiya has beautifully crafted the words. About her experience with ‘Bhammariyo’, Priya says, “Bhammariyo is a Gujarati word. Here in this song, it conveys the girls sentiments a about the boy who is like a ‘bee’. When Divya was composing the song, he asked me if I would write the song. I agreed because I loved everything about this song. The song originally was made in Gujarati then recreated into Hindi to make it more globally reachable.”

As a child artist, she travelled extensively with music directors Kalyanji–Anandji’s group – Little Wonders/ Little Stars, performing in live stage shows all over the world. She also trained under them.

“I always have discussed with Divya about him getting into composition as he somewhat belongs to that background. I am really glad that it’s happening now,” she says about the song.