Casting director turned actor Abhishek Banerjee has gained fame for his role Vishal aka Hathoda Tyagi in Amazon Prime’s web series ‘Paatal Lok’. The actor who is much loved for his performances in ‘Stree’, ‘Mirzapur’, etc., says that he had decided to take a break from acting until ‘Paatal Lok’ happened. “Paatal Lok got me back to acting. I had decided to take a leap. I am grateful to people for giving me so much love and appreciation,” says Banerjee.

He owes a huge credit to his passion for travelling that got the confidence back in him. “Whenever I used to visit somewhere, young guys met me and appreciated me for my works so far. That boosted my confidence.”

Throughout his acting in ‘Stree’ he feels that it gave him a big mileage. Nevertheless, response from the audience makes obvious that how much Hathoda Tyagi is appreciated.
“The portrayal of my character was so convincing that eventually I started getting offers for other such projects. That is how ‘Paatal Lok’ and Hathoda Tyagi came into the picture. I am bothered by bloodshed in real life, but when I play someone like Hathoda Tyagi, I completely forget my real life and get into the character. I feel that every actor can take inspiration from several sources, but his work should be unique.

The best compliment for Hathoda Tyagi was when I got a call from another actor and he felt the same move and emotion of my character that I felt while playing it. When an artist compliments your performance, that’s a different ballgame.”

When Abhishek was asked about his favourite performances in ‘Paatal Lok’, he terms that not only actors, but actresses like Gul Panag and Swastika Mukherjee have done a fabulous job. “Gul has nailed the character of Hathiram Chaudhary’s wife ‘Renu’. Swastika has performed commendably as ‘Dolly Mehra’. Dolly is the wife of an acclaimed news anchor who has her own parallel battle of anxiety issues.” 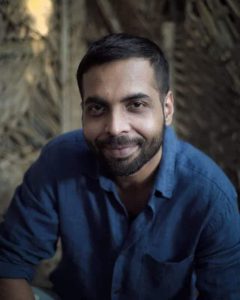 However, our beloved artist had not come down to Mumbai having a glittery dream of becoming an actor. He was pursuing career as a casting director but somehow, fate had its plans. Talking about his journey, Banerjee says, “After years of freelancing and understanding the scenario of entertainment industry, I decided to start my own company as a casting director. So that thing also helped me grow as an actor unknowingly. I perceived that understanding while working on the other side of the camera.”

He also goes on telling about the importance of auditions as it filters the best out of an artist. “Even if I am having lot of friends and colleagues in the industry, I believe in auditioning for each and every new project and character. Because that is how it should be. If you will not examine yourself, you won’t be aware of your plus points and flaws and work to improve.

He is currently working for a movie called ‘Helmet’ alongside Aparshakti Khurrana, and another one called ‘Ankh Micholi’ which is soon going to be on the floors.

PM Narendra Modi interacts with representatives from Varanasi based NGOs