Bhubaneswar: Painting a nice collage of sports and heritage, the Ekamra Walks today welcomed media persons from the on-going 22nd Asian Athletics Championships-2017 (AAC-2017).
The only guided heritage walk of the city showcased the priceless monuments and heritage sites to the guests, many of whom were first timers to the City of Temples and in fact, mesmerized by the upkeep of the heritage sites dating back from 7th Century Ad to 15th Century AD, in the Old Town area of the city.
The walk started with beautiful flute melody by artist Prakash Kumar Rout as he played `ragas’ like Ahir Bhairav, Jait, Nat Bhairav, Vivash and Bhairav, all morning `ragas’ and the visitors were overwhelmed with the flute recital at Mukteswar Temple. Later they visited Parsurameswar, Kotitirtheswar, Bindusagar, Ananta Vasudev, Lingaraj, Sari Temple and went to Art Vision to see a performance of Odissi dance.
Principal Secretary Tourism Arti Ahuja and Director Tourism Nitin Bhanudas Jawle joined the walkers and interacted with them and also invited suggestions from the scribes to how to put Odisha tourism on the national and international arena.
The guests, however, unanimously talked about the beautiful temple architecture, the way they are kept in the Old City and also the hospitality from the people and they also praised the new promo video on Odisha Tourism, which was also shown during the inauguration of the AAC-2017, last evening.
Well-known voice actress and founder and creative director of ‘Diary of a Dancebee’ Priya Adivarekar, who was a member of the media team, said “the city has developed a perfect blend of ancient heritage and cultural traditions and the technological developments in a perfect symphony and I am really happy to visit the city and take part in Ekamra Walks.
Shalini Saksena from Pioneer said that she is happy to see so many monuments within such a small area and she also praised the Odissi recital at Art Vision, the institute founded by renowned dancer Ileana Citaristi.
Neha Dara of Mint Lounge was also happy to see the intricate stone carvings and designs on the temples of the Old Town and especially in the Lingaraj Temple.
Rohit Paniker of Mail Today and Rasika Pote of ‘Diary of a Dancebee’ were also delighted to see the heritage structures and the ambience in the old city of Bhubaneswar, which has got 361 listed monuments on date. 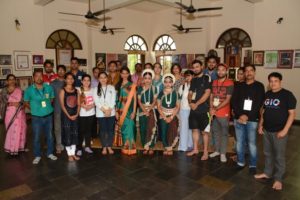 It can be mentioned here that while the guided heritage tour is organized every Sunday, today’s event was a special treat for the guest journalists covering AAC-2017.
Welcoming the guests Principal Secretary Tourism Arti Ahuja said “the places in and around Bhubaneswar is just a tip of an iceberg and Odisha has so much to offer as a land of golden opportunity for tourists of all interests and the tribal lifestyle is one area where the region can score over others.’’
Director Tourism Nitin Bhanudas Jawle spoke about the potential of Buddhist sites in the state as it was only a war field near Dhauli, on the outskirts of the city, where Emperor Ashoka took the shelter under the Buddhist fold and also helped in spreading the philosophy of non-violence and peace in the parts of Asia and beyond.
Though most of the visitors were first timers, they hoped to explore more of Odisha and planned to project more on its people, cultural heritage, art, history and archaeology in future.