Art is the proper task of life, said Nietzsche and Bertolt Brecht thinks that “if art reflects life, it does so with special mirrors”. Maybe yes but both the thoughts are conjoint. Art is certainly a proper task and reflects life in diverse paradigms without deviating from the influence of centrality, which is life itself. The self-conscious aim of life is to find expression, and art offers it beautiful forms through which life gets interlaced in a ‘mirror-continuum’. We are all the sum of the parts of our history, present and future and as guardians of the age, we reflect the zeitgeist and spirit of the times and enkindle the culture. Art is the lighthouse of times in transition. Odisha in its journey through different rulers, cultural forms and influences has taken recourse in its art, its alter ego, Art. The intimacy is palpable.

The sublime, cultured way of life of Odisha is adequately manifested by widespread and eclectic art forms across the state. This article attempts to cite a few examples of the intertwining of art and life in Odisha, in select settings, art forms and geographies.

Khiching town in Mayurbhanj district basks in antediluvian romance of art and heritage which flaunts the culture of seamless secularism (multiple faiths like Buddhism, Jainism & Brahmanism) were practiced and the antiquities unearthed from the sites around the Kichakeswari temple and other adjoining places reveal immaculate art work. In various forms, from stone carving to colour painting and sketches, the craftsmanship of ancient Khiching artisans and their architectural finesse is alive at Maa Kichakeswari temple, Kuteitundi temple, Chandrasekhar temple, forts and places at Kichakgarh and Biratgarh. Life in Odisha has been culturally vibrant and progressive. Baripada Museum was set up in 1903 and Khiching Museum in 1922 and these two museums pioneered archaeological documentation in Odisha, unknown then, under the British rule in Odisha.

Music is adjudged as one of the most impactful among 64 types of arts. Jayadeva’s Gita Govind celebrated the mortal-creator unity in an atmosphere of musical creativity, romance and synergy with the daily routines of soulful piety.  The love between Radha and Krishna, that he created, was an allegory for spirituality – a theme which was later developed Sri Chaitanya. The use of various rasas, the usage of the concept of “Ashtanayika” to describe the full range of emotions, with eight different moods of a heroine have majorly influenced the development of classical Indian dance forms. In Odisha, the performance of the Gita Govinda as a drama is central to Odissi, the classical dance form that originated from the temples of Odisha and portrayed the Odisha life and culture.

The unflinching belief in “befriending” the Supreme continues to pervade Odisha belief system. Lord Jagannath, the Supreme deity of Odisha is the “bhaktara bhagwan” or the “Lord of the devotee”. He is the friend, philosopher and guide of every Odisha household and embodies love as the only means of reaching Him. The Odia belief is one of intense devotion, passion; poetry, song and dance. Millions in Rath Yatra worldwide, celebrate life in riots of colours, different dances and music in the forms of bhajans and Kirtans. The carnival is a roadshow of art & culture, unparallel in the world, in sheer scale diversity and intensity. Prof Knut A. Jacobsen of University of Bergen observes that the Rathayatra as an event has a major community heritage, social sharing and cultural significance for the society at large. Jagannath is the core of Odishan way of life. Motifs of jhooti (traditional odia art in white colour made from rice paste and created using fingers on the wall and floor surfaces) across the state bear Jagannath-centric symbols and patterns. These jhootis are now considered hip designs used in saree and other garment prints. 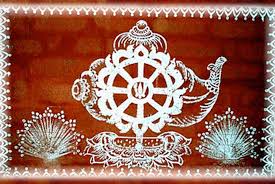 Tribal dances like dhap, banabadi, ghumura, chutkichuta, rasarkali, bajasaal and singari are an integral of festivities connected with different activities in the life of tribals – sowing, harvesting and consumption of first fruits, shifting cultivations, slash and burn method of soil treatment. The tribals worship nature and hence the paintings, dances and music are concomitant to the life of tribals – free spirited, progressive, moderately ritualistic and aligned to the flow of life and nature. The Santhals for example have a special spring festival of rejoicing with sprinkling of water, special songs and dances. The women-centric figures and sketches in the Bonda paintings in Malkangiri district reflect the matriarchal order in the community. Women are empowered and are the principal decision makers in a family and the community. The style of music and the sartorial preferences among the Juang, Bhuyan, Kondh, Saura, Gadaba, Jharia, Didayee, Koya and Bonda, tribes spread across Ganjam Malkangiri, Koraput, Rayagada, Kalahandi, Sundargarh, Boudh and Phulbani districts of Odisha primarily display agriculture as the central theme and exhibit allied community life centering around cultivation (includes sub themes like first-fruit eating, live-stock and crop welfare), livelihoods community well-being and group solidarity. Music and dance have traditionally played an important role in Odishan culture, specifically the tribals, who constitute more than twenty percent of the state population. Ancient tribal culture encompassed music into their everyday lives. Dance, story-telling and religious practices are all grounded on the music of the culture. In many ways, the tribal music and art is a utilitarian function used in vital aspects of life such as, a child’s naming ceremony, initiation rights, agricultural activities, national ceremonies, religious ceremonies and ceremonies for the dead.

Tribal paintings are original in idea and execution and the santhal and saura tribes accord them the dignity not found commonly. These paintings express the life of the tribes in which offerings made to the nature/forest gods, ancestors and spirits are much valued. The Saura tribes draw pictographs on the inner and outer walls of their mud dwellings called ‘Ittlans’ and the accent is on nature, the scenic outdoors and on the cycle of ploughing, sowing & harvesting. Above all the daily life and its inherent beauty. Nature is shackle free and so are the people of nature who are bohemian and know the art of appreciating nature and its limitless mystery. 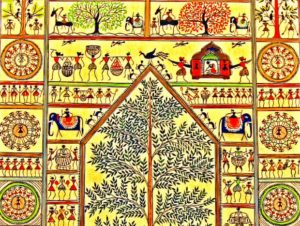 The first Oriya Magazine of Bodha Dayini published from Balasore in 1861 not only promoted Odia literature by providing a consistent platform but ventilated social thoughts on governance, through its well-researched writings. The first Oriya newspaper, The Utkal Deepika in 1866 encouraged modern and creative literature and mirrored life in those times. Radhanath Ray’s long verses like Chandrabhaga, Nandikeshwari, Usha, Mahajatra, Darbar and Chilika essayed the beauty and grind of life, under the western influence. Fakir Mohan Senapati , the doyen of modern Odia fiction, revolutionised Odia literature through a unique style combining realism, conciseness and portrayals closer to life and yet enigmatic. Chha Maana Atha Guntha cried about peasant exploitation much before the Russian October revolution turned into an ‘ism’.

Sambalpuri sarees with designs based on Chitra Kabya Bandhodaya authored by legendary Odia poet Kabi Samrat Upendra Bhanja depict the romance of life in Odisha. And contemporary textile designs are exhibiting the Devadasi/Mahari dance form of Odisha (social trends), celebrating art which reflects the divinity and grace of Odisha life.

Art is infinite and multifarious. While we, oscillate between the Aristotelian mimesis, (that art imitates life) or the Oscar Wilde anti-mimesis (that life imitates art), I would reiterate that Art & Life have been and continue to be the inseparables in Odisha. In every form, though in this article I have mentioned only a few of them, art unites lives and expresses life in myriad lens – from flirtation with imagery of the human body and self-portraiture and regular life, to expressing something comparatively intangible, a recurring psychological motif such as a state of mind, piety, a mood or a memory.

Life itself is an art. A true work of art is but a shadow of the divine perfection. Indeed, even those who regard art as an ideal and artists as idealists agree that art is a faithful mirror of the life and civilization of a period.

Art and life go together in Odisha and hence the soft power of Odisha.

(Charudutta Panigrahi is an author and a public intellectual)