New Delhi :Union Minister  Anurag Thakur today inaugurated DD News Conclave on 8 years of Government. The inaugural session consisted of a detailed discussion with the Minister on aspects covering the activities undertaken by the Government in last 8 years. The critical discussion included questions on the current state of economy and the country.

The Minister said that the Government has been able to sow seeds of development in the remotest corners of India. This is evident in the historically high number of people who have been brought above poverty line, an achievement in itself in the past 8 years. “The Government has been able to achieve in past 8 years what has not been done in past many decades” Shri Thakur remarked.

Shri Thakur further highlighted the achievements of Government like construction of over 12 crore toilets and over 3 crore houses, piped water connection to 45% homes in just last 3 years, gas connection to over 9 crore kitchens, electricity to all villages and homes. This has brought ‘Achhe Din’ for the poor people of India and the Government has set new standards in Good Governance, the Minister added. Summing up his remark on the overall performance of the Government the Minister remarked “saath se behtar aath” (8 years better than 60 years).

Shri Thakur further said that the chasm between the rich and the poor has decreased. 45 crore bank accounts were opened within 2 years, as a downstream effect of which, today India is making over 4 billion transactions a month on BHIM UPI, a feat being marveled at by big tech companies all over the world. This has enabled India to achieve what no country could do – transfer Rupees 21 thousand crore to accounts of 12 crore farmers at the press of a button by Prime Minister Shri Narendra Modi. “The JAM (Jandhan-Aadhaar-Mobile) trinity has demolished the system of corruption by middlemen in benefit transfers schemes. This has saved over Rs 2 lake crore of taxpayers’ money”, Shri Thakur added.

Speaking on inflation, the Minister said the world has seen many tragedies in the last two years. Compounding the crisis has been the dramatic rise in prices of crude oil which has been worsened by disruptions in supply chain due to the Russia-Ukraine conflict. “It is in these trying times and to remove the dependencies on extra-national factors that the Modi Government resolved to make India Atmanirbhar”, he said. He further added that the resolve was quickly turned into deeds and India started churning out 10 lakh PPE kits where there were none in the beginning of the COVID pandemic. India then led the world in distributing domestically manufactured medicines and subsequently vaccines too. Today despite the setbacks of the pandemic, India is the fastest growing economy in the world, the Minister said.

Rebuffing the allegations of under-reporting of COVID death figures, the Minister said the death figures are reported by States and a registry is maintained for all deaths and death certificates are issued. The robust system of death reporting will not allow for any under-reporting. The Minister recounted the resolution passed by State Health Ministers’ meet dismissing the elevated death figures by a foreign institution as baseless and aimed at tarnishing India’s image.

The Minister recounted the feat in the field of startups saying while the whole notion of startups was sidelined in the previous dispensations, the current Government has placed its bets on startups and it is because of the policies of the Government that India stands among the top 3 startup nations. The Minister further added that it was only in India that 50 startups turned Unicorn during the COVID pandemic and this is emblematic of a New India.

Speaking on the present image of India in the world right now, the Minister said that today Indians can proudly say that the Government in the last 8 years has been blemish free, the Indian passport is much more respected than before, the economy has strongly risen, the response to crises like COVID19 has been swift etc.

The Minister said the Government has responded resolutely on issues concerning national security. This has included taking action against social media propaganda channels running from across the border. 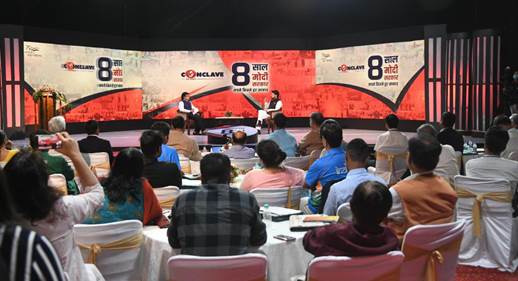 Sound has the ability to define the space and meaning: Resul Pookutty

President of India along with the Prime Minister visits Pathri Mata Mandir and Milan Kendra; pays tributes at the statue of Dr BR Ambedkar and addresses a public gathering at his native village Paraunkh