New Delhi : It was a double celebration for Indian Sports on Tuesday as Union Minister of Youth Affairs and Sports Shri Anurag Singh Thakur felicitated India’s Archery and Boxing contingents who have returned from the World Cup in Korea and Women’s World Championship in Turkey, respectively.

The felicitation programmes were held at the SAI’s National Centre of Excellence in Indira Gandhi Stadium, which is also the training ground for India’s elite boxers. India has won 5 medals in the Archery World Cup and 3 in the Women’s Boxing World Championships over the last few days. 16 Indian archers won a Gold in the Men’s Compound Archery, 1 silver and 3 bronze medals, while the women boxers bagged a World Championship Gold and two bronze medals.

Boxer NikhatZareen who won the World Championship gold in her weight category and became the fifth Indian woman to do so, spoke with passion at the event when she said, “I am standing here as a World Champion today and I will stand here again as an Olympic medalist as well.” Medalist boxers Manisha Moun and Parveen bagged bronze medals.

Lauding Nikhat’s zeal, Union Sports Minister ShriAnurag Singh Thakur said, “Our betis (daughters) have made us proud. There was a time when Prime Minister Shri Narendra Modi used to speak about BetiBachao, BetiPadhao and now it’s bearing fruit. Nikhat said she doesn’t want to stop; she wants to win more medals. We need this passion and dedication from you all. We have to keep going forward. You are the inspiration for grassroots athletes. The TOPS scheme has ensured everyone gets the facilities. We must celebrate what we have achieved today but always aim for the next big Championships. Let’s bring more medals for India in Olympics 2024.” 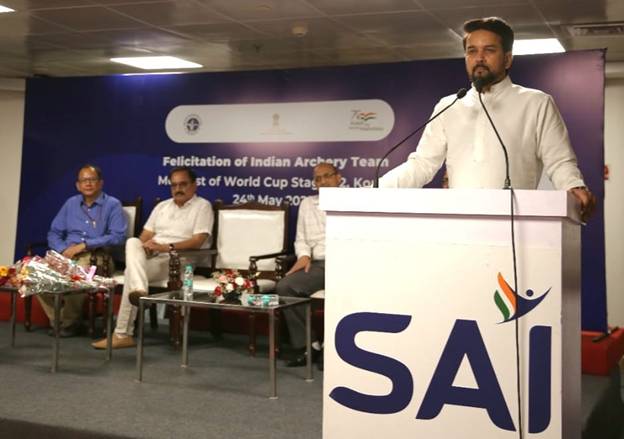 Urging those present for the felicitation programme to show their appreciation for the medalists, Shri, Thakur said, “They have worked so hard to win these medals, I am sure we can clap hard to show them how much this win means for the country. We must make it our habit to show our appreciation for our athletes, because they are doing it for the country.” Saying that he clapped for the athletes for a long time, in a unique gesture to appreciate their hard work. 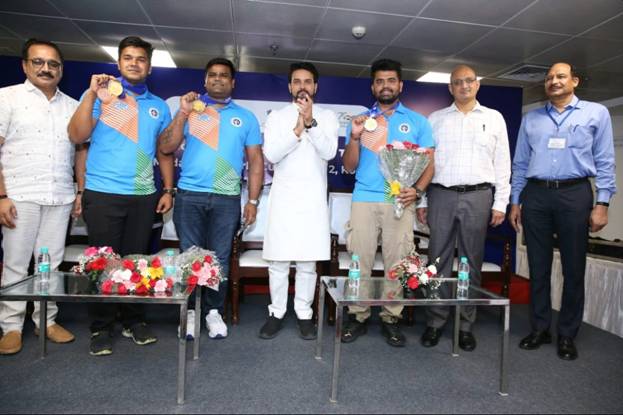 Sharing their experience of the tournament Abhishek Verma said, “We were preparing for the Asian Games so the team is in a great form now. There has been a significant improvement in India archery in terms of accuracy and technical aspects. With the all-round support in terms of infrastructure, coaching, exposure, camps from the federation and the government, we are being able to achieve so much. Going forward this momentum will continue and in June, as we go in for the next stage of the World Cup we will come back with more medals.”