SJTA Chief Administrator Pradipta Kumar Mohapatra said, Subramanium advised that the donation or dakishna system should be stopped. ‘Hundis’ should be installed at four prominent places of the temple and the ‘Annadana Atika’ practice should be discontinued. 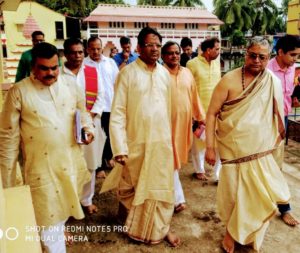 No one should stop devotees during ‘bahara’/’bhitrara katha’ darshan and different colour ID cards should be provided to different servitors. A final decision will be taken after the Amicus Curiae submits the report to the Supreme Court, Mohapatra said.

“The Amicus Curiae supports the hereditary rights of servitors. But he suggested that the number of servitors should be limited as per the requirement.”

Earlier in the day, the Amicus Curiae met Puri King Gajapati Dibyasingha Deb at the royal palace and held discussions with SJTA administrator, Puri Collector and SP as well. There is consensus on nine proposals out of the 12 suggested by the Supreme Court, according to reports.

BJP all set to retain power in Gujarat; wins 8 Assembly seats, leading in 150…

BJP to form government in Gujurat for second time