#AFCCup2019 : Minerva Punjab to play against Nepal’s Manang Marshyangdi Club at Kalinga Stadium on May 1 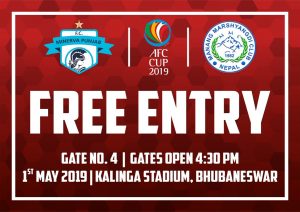 Both the team have arrived in the city. Team Minerva Punjab welcomed their opponents when they reached last night at Biju Patnaik International Airport ahead of the match .

After the goalless draw with fellow Indian side Chennaiyin FC in their group opener, Minerva Punjab were close to registering their first win in the second round but Abahani Limited Dhaka came back twice to pick a point in a 2-2 draw.
Samuel Lalmuanpuia and Mahmoud Al Amna’s additions have provided the much required bite up front with the Syrian scoring one of the goals off a delightful cross by Makan Winkle Chote in the last match.
Though Minerva were lucky to score twice, their defence has been a bit suspect and were cut open twice by Abahani Dhaka.