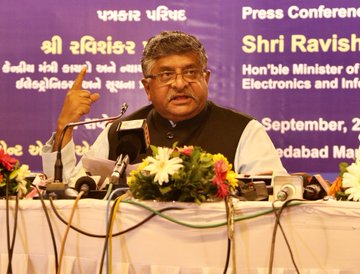 New Delhi: Government of India under the leadership of Narendra Modi has demonstrated unique boldness and decisiveness in the first 100 days of its second term. Addressing media persons on the achievements of the Modi.2.0 Government in its first 100 days, the Union Minister of Law and Justice, Communications and Electronics and Information Technology Shri Ravi Shankar Prasad said this in Ahmedabad today.

Allaying the fears of economic slowdown, the Union Minister categorically said that the fundamentals of Indian growth story are intact so the declining of GDP in the first quarter to 5% is certainly not a sign of overall disappointment. He added that the Central Government and the State Governments are taking multifold actions to protect the economy from worldwide recession and at the same time give an impetus to development through various measures such as credit expansion by PSBs, merger of PSBs and relaxing the norms for NBFCs. Mr Prasad said that a temporary slowdown will be checked by multidimensional pro-development efforts which will not only generate large scale employment but will also ensure enhanced private sector investment in sectors such as agro-processing, real estate and construction and other manufacturing sectors. Replying to a question, the Union Minister said that the people of Jammu and Kashmir are well aware of the benefits of the Government’s action to abrogate various provisions of Article 370 and abolition of 35A. Lambasting Pakistan for gross human rights violations in PoK, the Minister asserted that if any talks in terror free atmosphere with Pakistan will be held that will be on PoK. Showering praise on the leadership of the PM, Shri Narendra Modi, he said that the decisiveness of leadership has provided clear directions for inclusive development of the nation as a whole. Enumerating the achievements further, the Minister said that there has been a quantum jump in the “ease of doing business” worldwide rank from 142nd in 2014 to 77th in 2019.

The Minister also cited simplification and digitization process in major tax structures as another significant feather in the cap. The Law Minister informed the media persons that abolition of triple talak and amendment of POCSO Act have been welcomed by all as deterrent laws in prevention of respective crimes. He further said that under PMJAY, 16,000 hospitals have been empaneled and 10 crore e-cards have been issued in addition to over 20,000 health and wellness centers being made operational. Mr Prasad lauded the PM KISAN Maan Dhan Yojana saying that crores of farmers are being benefitted under this scheme. The formation of new Jal Shakti Ministry is a landmark step in the direction of water- saving, water conservation and waste water treatment, the Minister opined.

The Minister of State for Home in Government of Gujarat Shri Pradeepsinh Jadeja, Members of Parliament Shri Hasmukh Patel and Dr Kirit Solanki were also present during the media interaction.