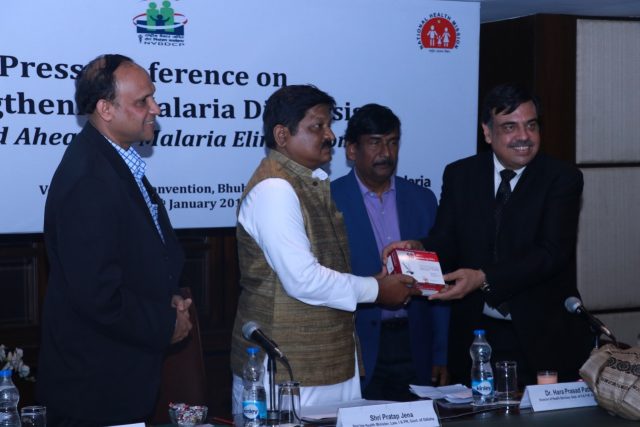 Bhubaneswar: Abbott announced today that it is supporting a partnership between the government of the eastern Indian state of Odisha and Malaria No More, providing technology, expertise and funding support to advance efforts to end malaria in the state.
The partnership builds on Odisha’s success in significantly driving down malaria cases and deaths in the last year. With a population of nearly 42 million people, Odisha accounted for about 40 percent of India’s malaria burden and one-third of Southeast Asia’s malaria burden in 2016.1 In support of India’s 2015 commitment to be malaria-free by 2030, the government of Odisha has prioritized malaria control and elimination.

In collaboration with Malaria No More and the government of Odisha, Abbott is supplying 1 million rapid diagnostic tests (RDTs) and technical expertise to strengthen Odisha’s malaria detection and surveillance system. In addition, Abbott is providing US$750,000 (INR 52 million) over three years to Malaria No More to back its work with the Odisha government to define and support a comprehensive state malaria elimination strategy that can be used as a model for other states to follow.
ODISHA – LEADING THE WAY IN INDIA’S COMMITMENT TO ELIMINATE MALARIA
According to the recent WHO World Malaria Report 2018, India, with a population of 1.3 billion people, has the fourth highest malaria burden in the world and of the 11 highest burden countries, was the only one to have reported a reduction in malaria cases – 24 percent – between 2016 and 2017.

In 2017, India launched its five-year National Strategic Plan for Malaria Elimination, which shifts focus from malaria “control” to “elimination” and provides a road-map with targets to end malaria in 571 of India’s 678 districts by 2022.
India’s recent progress was largely due to substantial reductions in malaria cases in Odisha.
Through persistent efforts and innovative approaches, Odisha achieved an 80 percent reduction in cases in less than one year. Odisha’s success is due to innovative approaches such as training 47,000 Accredited Social Health Activists (ASHAs) to reach its most vulnerable citizens with rapid diagnostic tests and other life-saving malaria interventions in areas where most cases remain.
INNOVATIVE RAPID DIAGNOSTICS TO PLAY CRITICAL ROLE IN DETECTING MALARIA
Eliminating malaria will require more robust and accurate data. Rapid diagnostic tests are the frontline first step of data collection that can provide baseline information for Odisha’s malaria surveillance system. With strategic use of data, health officials can make better decisions about where to deploy the most effective malaria control tools.
“Abbott is committed to supporting the partnership to help end malaria, including sharing our life-changing technologies that can detect malaria,” said Damian Halloran, Vice President, Infectious Disease–Emerging Markets, Abbott. “The government of Odisha deserves enormouscredit for its commitment to the fight against this deadly disease. Together with Malaria No More, we’re looking forward to advancing this important work and to further building out Odisha’s surveillance and data collection capacity.”
The 1 million rapid diagnostic tests donated by Abbott will be the antigen-based SD BIOLINE
Malaria Ag P.f/P.v, a screening test for the detection of Plasmodium falciparum (P.f) and
Plasmodium vivax (P.v) parasites in human whole blood.
EXPANDING THE IMPACT OF ODISHA’S SUCCESS MODEL
Expanding access to diagnostics and treatment, strengthening data collection, distributing 11 million bed nets and improving health care worker skills propelled Odisha’s fight against malaria in 2017. The government’s DAMaN initiative, which stands for Durgama Anchalare Malaria Nirakaran, or “Malaria Control in Inaccessible Areas,” included village-wide testing for malaria using RDTs and treatment campaigns – along with malnutrition care and other services – to substantially reduce parasite levels before the monsoon season caused mosquitoes and malaria to proliferate.
To increase the impact of Odisha’s success model, in August 2018, Malaria No More entered into an agreement with the government of Odisha to provide technical assistance to the Odisha Vector Borne Disease Control Program (VBDCP) and support overall strategy development.
Malaria No More is working with Odisha’s VBDCP to strengthen malaria surveillance and reporting; improve data-driven decision-making and enhance private health sector reporting of malaria; and, create compelling health education and behavior-change campaigns. Malaria No More is also helping the government to engage a range of private sector, technical, academic and media partners to support Odisha’s drive toward malaria elimination.
“Malaria No More is proud to support the government of Odisha in its ambition to end malaria,”said Martin Edlund, CEO for Malaria No More. “We are starting to bring on board key partners like Abbott to support expansion of Odisha’s innovative strategies and to build their capacities – particularly in the areas of improving data and surveillance – to have even greater impact moving forward. Supporting Odisha’s work will continue to fuel India’s goal to eliminate malaria
by 2030.”