Bhubaneswar: 8 Cyclists of Bhubaneswar Cycling and Adventure Club (BCAC) recently completed an adventurous journey of 800KMs among the mountains and jungles of Sri Lanka as its flagship International Adventure. As an annual event, BCAC conducts an International Ride for its members since its inception. In the past, during 2015, BCAC members cycled from Bhubaneswar to Bhutan, Vietnam to Cambodia in 2016, Katak (Cuttack) to Kathmandu in 2017 and Manali-Leh-KhardungLa in 2018 with a message of “Peace and Friendship”. Continuing the trend of International Cycling Expeditions, 8 members of BCAC set out on an adventurous journey in the highlands and plains of Sri Lanka in 2019. With a theme of “Reconnecting Buddhism”, these BCACians covered the most significant Buddhist Monuments and Pagodas in Sri Lanka drawing a route-map of “Numeric 8” on the land of Sri Lanka.

The cyclists who started their adventure from the coastal metropolis of Colombo, covered Portuguese Fort city of Galle, passed through the beautiful beaches of Matara and Weligama on the spice route through Udawalawe, and Dehiowita to world famous Buddhist heritages in Dambulla, Sigiriya and Kandy before coming back to Colombo to finish their adventure. On the way, they explored the history and present day Sri Lanka through the lenses of Buddhism, culture, traditions, people, innovation and development. They paid their homage to the Tsunami affected at Peraliya in Hikkaduwa district and witnessed the wrath of Tsunami through the museums and monuments. They also witnessed the resilience of people of Sri Lanka after the hit of Tsunami in 2004.

Speaking about this adventure, Ajay Nanda shares – “While cycling through the landscapes of Sri Lanka, we interacted with people and found them to be quite welcoming, humble and helpful. We received a warm welcome and smiling faces, everywhere we moved inside the island. The traffic here is quite systematic, except a few instances of rough driving. But the alert police force keeps everything in order with surprise checking at places. We are delighted to see the cops helping school children and elderly people to pass the roads smoothly during rush-hours. The people here are quite humble and stop their vehicles whenever they see pedestrians or cyclists trying to cross the roads. The sense of compassion and awareness about the convenience of others is what we witnessed most in this beautiful country.” 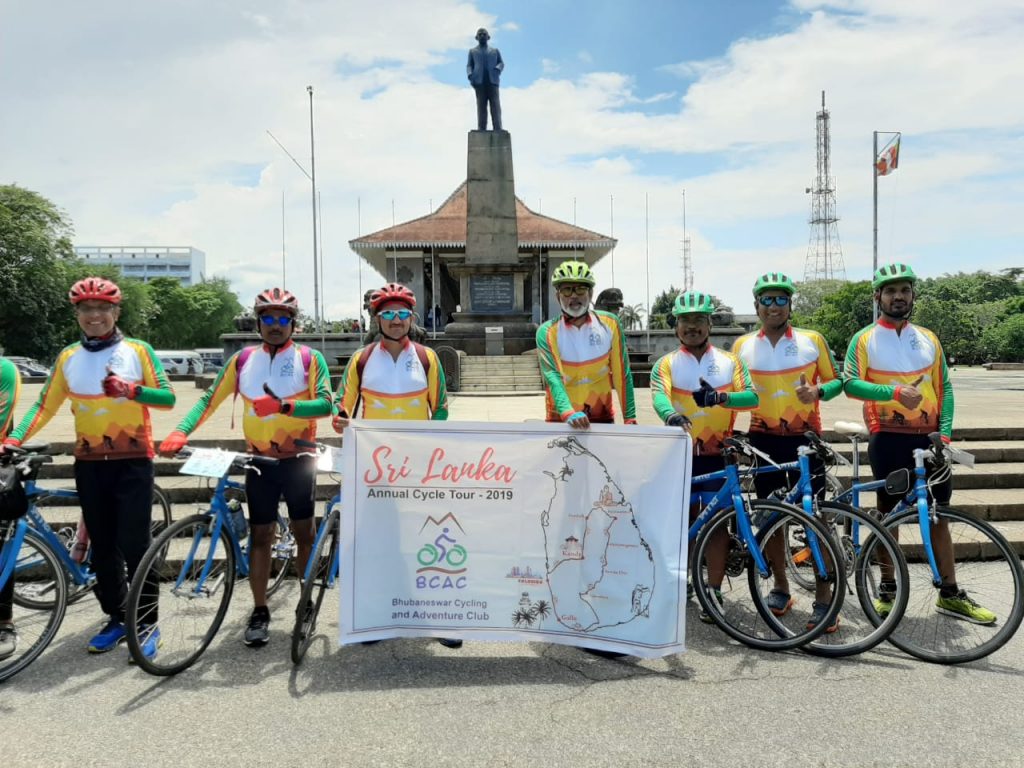 “Though language was a major concern for us, still we could manage as the people here are affectionate and caring. We received warm welcome at almost all the places and received the best treatments as foreigners. The concept of “Spice Gardens” on the roadsides excited us and we received the service of demonstration and ayurvedic massage at some of the spice gardens. We also tasted a lot of new varieties of tropical and exotic fruits throughout our adventure in this land. We received guided tours in tea-estates and were quite happy to witness the sense of cooperative business models among the women in Sri Lanka. We are delighted to taste various new dishes at cooperative stores, especially run by the women, whose motherly affection filled our heart with gratitude to this beautiful country.” – adds Ajay, who is also the Secretary of BCAC.

Shading light on the adventure of this terrain, Bibhu Prasad explains, – “The route was really scenic and adventurous. Except the Day-1, when we were cycling from Colombo to Galle on a coastal stretch of 125Kms, we faced quite hilly terrains on rest days of our cycling. Especially, the climbs were treacherous on hot day time, which turns into bliss in the afternoon with the rains. We enjoyed the terrains and climbs while playing hide-n-seek with sun in the mountains. From Galle to Kandy it was quite a bit of climb on the roads. Sometimes the climbs extend up-to 5 to 6Kms at a stretch on a climbing terrain. The roadside streams were much helping to cool our hot bodies which were pedaling with quite a bit under pressure. Though it was a difficult terrain for cycling on our route, but we enjoyed every bit of it while covering miles after miles. The rain rides in the afternoon was quite pleasing for the body and the soul.”

“I have been a part of Vietnam-Cambodia and Manali-Leh-KhardungLa expedition of BCAC in the past. But this is one of the most memorable tours of my cycling with BCAC so far in terms of adventure, public interaction and exploration. I have found this terrain quite adventurous and soul-warming when you explore it on a bicycle.” – Bibhu, who is DGM in NABARD, adds to his experience.

This tour, which started with a message of “Peace and Friendship”, touched the places of Buddhist importance and was an eye-opener for the members. The rich heritage of Buddhism is quite well-preserved in this country with a significant Buddhist population. People are cultured and affectionate and we have hardly seen an accident on the roads during the entire period of our journey. Though modernization is taking place, still the values and principles are alive in the heart of the general public displaying a beautiful picture of Sri Lanka to the foreigners and tourists.

Not only filled with adventure, but this International Cycling Expedition of BCAC also exposed its members to a new country, a new culture, a unique experience and a dream destination for cycling. BCAC will continue this saga of International Cycling Tours in the coming years and will keep exploring new destinations and a new world with a healthier and greener practice of cycling beyond borders.

MoS for Ministry of Health & Family Welfare, Dr. Bharati Pravin Pawar is on a…