The 1st All India Annual States’ Ministers Conference on “Water [email protected]” began today in Bhopal, Madhya Pradesh. The two days conference began with the auspicious ‘Jal Kalash’ ceremony by the Chief Guest and Dignitaries. The ceremony was followed by a special address by Prime Minister, Shri Narendra Modi via video message wherein PM highlighted the importance of the Conference of Water Ministers of the country by shining the light on the unprecedented work done by India in areas of water security. PM highlighted that water is a state subject as per the Constitution of India and therefore, it is the states’ efforts for water conservation that will go a long way in achieving the collective goals of the country. “Water Vision @ 2047 is an important dimension of the journey of Amrit Kaal for the next 25 years”, the Prime Minister remarked.

Highlighting the importance of the circular economy in the field of water conservation, the Prime Minister informed that the government has laid a lot of emphasis on circular economy in this budget. “When treated water is reused, fresh water is conserved, it benefits the entire ecosystem. That’s why water treatment, water recycling is essential”, he said. He reiterated that states have to find ways to increase the use of ‘treated water’ for various purposes. “Our rivers, our water bodies are the most important part of the entire water ecosystem”, the Prime Minister said as he emphasised creating a network of waste management and sewage treatment in every state. “By making the Namami Gange Mission a template, other states can also start similar campaigns for the conservation of rivers. It is the responsibility of every state to make water a subject of cooperation and coordination”, the Prime Minister concluded.

Delivering the Keynote address, the Union Minister of Jal Shakti Shri Gajendra Singh Shekhawat lauded the commitment of Chief Minister of Madhya Pradesh towards water conservation and for the unwavering efforts put by him and the entire State government in hosting this conference in Bhopal. Shri Shekhawat said “India has become a leader in the field of Water and Sanitation under the guidance of Prime Minister Shri Narendra Modi”. Welcoming the participants, the Union Minister said that Indian economy has continued its growth trajectory despite COVID pandemic and it is estimated that by 2027, India will become the third largest economy in the world ahead of Germany and Japan. He said “there is a direct correlation between economic growth and the consumption of electricity and water. PM has given a clear roadmap for becoming a 3 to 5 trillion dollar economy and further a 10 trillion dollar economy. Therefore, there is a need to discuss the water requirements and its availability at a macro level through such conferences”.

The Union Minister further stated “India’s water availability of 4,000 BCM through rain, glaciers or international basins, out of which, total harvestable component which is usable is half of this. Climate change has changed rainfall patterns with scanty and erratic rainfall which has and continues to negatively impacted this harvestable component. Along with climate change, rapid urbanization, increased demand of water and water pollution together have reduced the per capita availability of water from 5000 CM to 1500 CM and by 2047 it might further reduce to 1200 CM and therefore, all of us must discuss ways to overcome this challenge holistically”.

Shri Shekhawat said “by 2047, our requirement is likely to surpass the availability of water and this is the reason why Prime Minister insisted that this conference should be held with all the States to holistically discuss this issue, chalk out a roadmap to ensure preparedness and contingency planning. Our country is fast moving towards becoming a developed country and therefore, it becomes important to start planning and working towards ensuring water availability for the future. We all need to keep working together to work out a plan for all States individually and together as a nation towards ensuring water availability”.

The Union Minister for Jal Shakti further added “In 2019, Prime Minister gave me an opportunity to work for a unified Jal Shakti Ministry, through which we have been able to measure our water resources in a better manner along with the States. Just like food is being calculated now based on its nutritious value not weight, similarly water requirements need to be measured in a more holistic manner. We need to deal with challenges including increasing storage capacity through small storage facilities on the lines of Amrit Sarovars as envisioned by PM. Awareness has increased through the efforts and initiatives taken by the Union and State governments. The Jal Shakti Abhiyan launched by the Prime Minister, which brought together various organizations, Panchayats, NGOs, Celebrities etc., has started showing good results as can be seen through the ground water report released. This has led to a reduction in the over exploited, critical and semi critical number of blocks while safe blocks have increased by more work needs to be done in this field with a focused approach”.

Concluding his address, the Union Minister stated “Storage capacity reduction of dams due to sedimentation of reservoirs needs to be worked on and initiatives need to be taken in this regard so as to ensure optimal utilization of reservoir capacity. It is our responsibility to save our rivers, conserve wetlands and protect catchment areas and reduce their degradation. We also need to work on demand side management along with uninterrupted supply. Contamination of water resources need to be stopped, In the coming two days, we all need to deliberate and discuss these issues and learn from best practices of each State and ensure sustainable development of new infrastructure. We need to continuously keep meeting to holistically discuss these important issues and reach solutions together and ensure that water does not become a hindrance to nations progress and development”.

Delivering the inaugural address, the Chief Minister of Madhya Pradesh, Shri Shivraj Singh Chouhan highlighted the efforts undertaken by the State government towards water conservation for optimal utilization of this precious resource. The CM used an example out of his own life when he was MLA to highlight the importance of people’s participation or Jan Bhagidari. The Chief Minister stated that Narmada River comes from the root of trees and therefore, if trees remain only then will the rivers thrive. Shri Chouhan said that the State is making a water Policy within a month which will be comprehensive and cover various aspects such as water conservation, increasing water availability, rain water harvesting, recycling waste water, more crop per drop etc. Talking about the Jal Jeevan Mission, the CM said work is under progress worth approximately 50,000 Crores and earlier water was being provided to only 14 % households which is now increased to nearly 47%.

Shri Chouhan quoted Rahim, Tulsidas and the Vedas wherein importance of water has been emphasized upon. He said ponds should be made in farmlands, more trees should be planted and more crop per drop should be ensured so as to make best use of water resources. He exhorted all the participants to debate and deliberate out of which solutions will definitely emerge which will then benefit the entire country. The Chief Minister said the State of Madhya Pradesh will also benefit from these solutions and will implement and undertake all possible measures in this regard. He reiterated the message of Jan Bhagidari given by the Prime Minister and said that State of MP has continuously strived towards water conservation and tree plantation. Shri Chouhan asserted that he planted 3 trees daily to lead by example and urged all to plant trees with him tomorrow morning i.e., 6th January, 2023 and it will be called Water Vision Garden. He said this will send a message to the entire nation that water can be conserved through tree plantation.

The dignitaries launched the National Framework on Reuse of Treated Waste Water, National Framework for Sedimentation Management, Best practices under Jal Shakti Abhiyan: Catch the Rain and inaugurated a sub-portal of ‘Jal Itihas’ under the WRIS portal as part of Azadi Ka Amrit Mahotsav along with an exhibition. During high tea, snacks were provided from water saving Millets.

The objective of the conference is to deliberate on Water Vision for India for the next 25 years i.e., till 2047 as part of the larger plan of [email protected] as envisioned by Prime Minister, Shri Narendra Modi. The forum aims to bring together key policymakers for debating and deliberating on ways to optimally utilise water resources for holistic economic and human development in a sustainable manner. 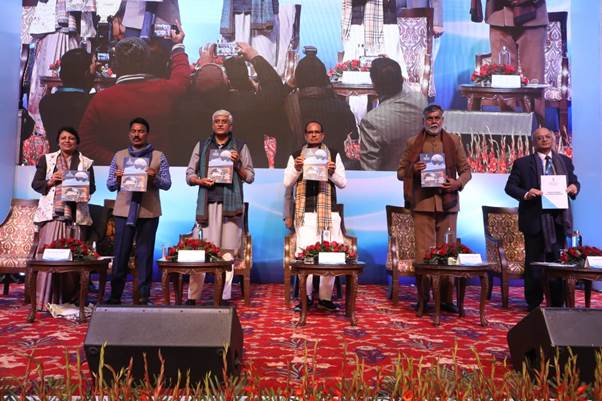 During high tea, snacks were provided from water saving Millets.